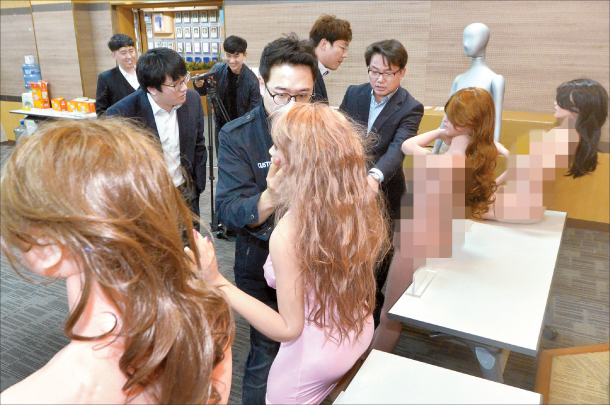 eon Main Customs employees examine sex dolls that were smuggled into Korea disguised as mannequins in 2017, before the Supreme Court ruled it legal for sex dolls to be imported into Korea in late June. [JOONGANG ILBO, NEWS1]

When a former prosecutor claimed during a television appearance early last year that she was sexually assaulted by another former prosecutor with the Ministry of Justice, the “Me Too” movement against sexual assault and harassment was spotlighted in South Korea along with a host of other gender issues.

A plethora of other related stories have garnered attention since then and discussions on the topic recently reignited when a shipment of sex dolls was imported into the country by an adult merchandising company for the first time since the Korean Supreme Court ruled the import of such dolls legal in late June.

The Supreme Court ruled that the government should not interfere with one’s personal and private life to protect “human dignity and freedom,” but soon after, a Blue House petition gathered some 263,000 signatures in just one month, pleading with the government to ban the sale or import of the dolls because they violate women’s dignity. Others worry these dolls could breach people’s portrait rights such as famous celebrities, as some companies offer customized dolls according to the customer’s requests.

But the debate the sex dolls has stirred is just the beginning of an ongoing contentious discussion.

Figures on references to gender issues online show that this topic is only gaining traction.

Tapacross analyzed big data consisting of 5.4 million references on online platforms from January 2016 to June 2019. Social network platforms, blogs and online communities were selected and analyzed, and Tapacross identified the changes in people’s interests during this period.

Over 3.9 million references, which amounts to 73.6 percent of the data, were about gender issues. Of those references, 62 percent used negative expressions and only 8 percent contained anything positive, according to the research company.

Top issues related to gender issues include the Hongik University male nude model incident in 2018 when a female model in a still life drawing class posted online photos of one of her male colleagues posing nude for a class.

She was tried for illegally filming and sharing photos and punished with a prison term of 10 months. Some women found that treatment overly harsh and said that men who posted nude photos of women were never punished so strictly.

A 2018 rally against spy cams at Hyehwa Station in central Seoul, one of the biggest women’s marches in Seoul ever, was another top issue, while the charges against singer Jung Joon-young for secretly filming and distributing explicit videos of women by police in April was also included. The singer had allegedly been carrying out these activities since 2016 and was questioned in March 2019 when police found he was in a KakaoTalk group chat room with K-pop mega-star Seungri, who was at the time being investigated for his affiliation with the Burning Sun nightclub in Gangnam District, southern Seoul. 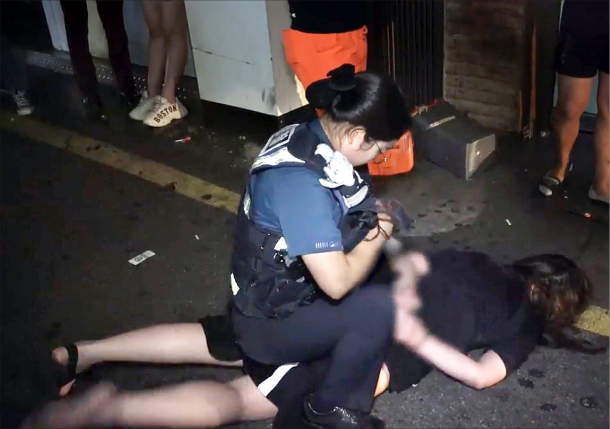 A policewoman holds an intoxicated woman who went on a rampage in the neighborhood of Hongik University in western Soul on July 19. [JOONGANG ILBO, NEWS1]

The Burning Sun scandal revealed the club was an alleged hotbed of prostitution and drug use, shaking Korea’s entertainment industry, law enforcement and society in general to the core.

“Recent issues relating to gender are on a completely different scale than issues about ideologies, regions or generations,” said Choi Hang-sub, a social science professor at Kookmin University. “They are characterized by people expressing extreme anger like ‘we do not need the other gender.’”

But it’s not just individuals who are facing the brunt of the backlash between the sexes. A video of a female police officer has unleashed a debate on whether certain occupations are suitable for the opposite sex to have.

The short video in question, which was uploaded on an online forum on May 15, stirred controversy after is showed a female police officer struggling to apprehend intoxicated men in Guro District, western Seoul.

In the video, police officers attempt to apprehend some intoxicated men after one of them slaps an officer in the face. The female officer struggles to apprehend one of the men and can be seen asking for assistance from a crowd, desperately shouting for “a man” to come and help her. She also requests for help to put the suspect in handcuffs.

The video rapidly spread across the internet with people fiercely criticizing how the female police officer handled the incident and a petition calling for “real police officers” to be hired instead of females was posted on the Blue House website.

In light of the incident, several other occupations were put in the spotlight, including military personnel and firefighters, with people criticizing female workers in certain occupations for not pulling their weight in comparison to their male counterparts.

It’s not the first time gender issues related to job roles have been under fire. A 2017 documentary on Korea Military Academy cadets was criticized by viewers when a scene in the program showed several male cadets carrying some of a female cadet’s equipment during their training. Soon after, the military deleted the video from their website.

But the video only showed one side of the issue at hand. “My military experience was in itself a huge experience of sexual discrimination,” said a female marine who was recently discharged and wished to maintain her anonymity. “I was overwhelmed by the double standard where female soldiers are criticized by the public but upheld as the ‘unit’s flower.’”

A training video of a local fire department also garnered attention. In a fire drill, male firefighters were seen fully geared up, running up the stairs of a multi-story building, whereas a female firefighter was seen in ordinary work wear with only a walkie-talkie and whistle.

The focus on physically demanding occupations in turn brought attention to easier fitness tests for females. Both genders are tested on their ability to run and do sit-ups and push-ups, but the passing score for female police officers and military candidates is 20 to 40 percent lower than that of their male counterparts.

In the case of the police, male candidates must do at least 58 sit-ups, 58 push-ups and run a 100-meter (109-yard) course under a certain time in order to get a perfect score of 10 points. But for females the time constraint is slackened and they must complete only 55 sit-ups and 50 push-ups.

Some worry that female police officers won’t be able to physically apprehend criminals while others criticize the current test for being favorable to men and say the tests are not vastly related to apprehending or arresting criminals.

“I agree to strengthening the criteria for female police officer’s physical tests,” said Ju Myeong-hee, a police chief superintendent who is in charge of a gender research team. “The problem is that the criticism is focused on push-ups. We need to examine various standards in evaluating physical aptitude and above all, it is more important to maintain [police officer’s] fitness after they are appointed through training.”

Experts warn that extreme forms of sexism will obscure social integration and will make it impossible for people to debate on various social issues.

“In the past, gender issues had a positive side in that it provided a remedial solution by allowing discussions on social issues like women’s safety and hidden cameras to be unfolded,” said Heo Min-sook, a legislative investigator for the National Assembly. “However, recently, there is a side to gender disputes that degenerated to a place of hate and anger instead of a healthy discussion to create gender equality or provide a solution to social problems.”