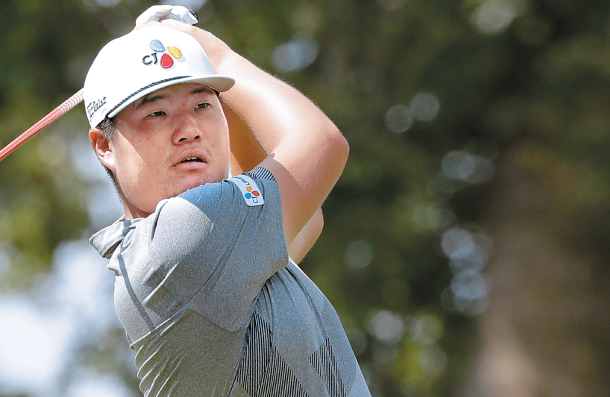 Im Sung-jae watches his tee shot on the fourth hole during the pro-am round of the BMW Championship golf tournament at Medinah Country Club in Medinah, Ill., on Aug. 14. [AP/YONHAP]

Korean rookie Im Sung-jae has qualified for the exclusive-field season finale on the PGA Tour, becoming the first player from the country to do so in three years.

Im finished the BMW Championship, the second leg of the FedEx Cup playoffs, in a tie for 11th at 13-under 275 at Medinah Country Club in Medinah, Ill., on Sunday.

After carding a bogey-free 67 in the final round, Im ended in 24th place in the FedEx Cup points standings to qualify for the Tour Championship. Only the top 30 in FedEx Cup points will play at East Lake Golf Course in Atlanta starting Thursday.

Im needed to finish inside the top 28 at Medinah to secure his spot at East Lake. He was tied for 24th through three rounds, and picked up three birdies and an eagle to finish one shot out of the top 10.

The 21-year-old drained long birdie putts on the third and fourth holes, and chipped in for an eagle at the par-5 seventh. He picked up another birdie at the 10th.

“I made some early birdies, [and] it was a good start,” Im told the PGA Tour. “It relieved me of some pressure and helped me perform well for the rest of the day.”

Im is the fifth Korean to compete at the Tour Championship since the FedEx Cup playoffs began in 2007 and first since Kim Si-woo in 2016.
Im will be the only freshman in the exclusive field, which will give him a leg up on the competition for the Rookie of the Year award.

Since 2007, every Rookie of the Year winner has had the most FedEx Cup points in the first year class. Only Rickie Fowler in 2010 and Chesson Hadley in 2014 were named top rookies without qualifying for the Tour Championship.

No Asian-born player has been named the PGA Tour’s top rookie since the award’s inception in 1990. In 2012, Korean-American John Huh earned the best rookie honors, but he was born in New York.

Im was both the Player of the Year and the Rookie of the Year in 2018 on the second-tier Web.com Tour, which is now called the Korn Ferry Tour.

“It’s going to be an honor if I can win Rookie of the Year, the first Asian and Korean player to win the award,” Im said. “I’m really happy to qualify for the Tour Championship. My goal this season was to get to Atlanta.”

The one thing Im lacks that other contenders have this year is a tour victory. Im has played in 34 tournaments, more than any other rookie, and has recorded seven top-10 finishes, which ties him for eighth most on the tour.

Collin Morikawa, Cameron Champ and Adam Long each have a victory. But Morikawa has only competed in nine tournaments, while Champ and Long have been quiet since notching their wins in October and January, respectively.