Ryu was touched for four earned runs on six hits, including two home runs, in five and two thirds innings, as the Braves defeated the Dodgers 4-3 at SunTrust Park in Atlanta on Saturday. 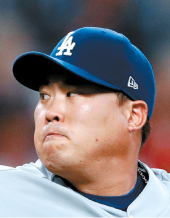 Ryu hadn’t lost since June 28, when he was rocked for seven earned runs in four innings against the Colorado Rockies at Coors Field in Denver. Saturday marked only the second time in 23 starts this year that Ryu has allowed more than two earned runs in a game.

In six starts after that debacle in Denver, Ryu had limited opponents to two earned runs in 47 and two thirds innings with zero home runs allowed. That homer-less streak ended in the sixth Saturday, as Josh Donaldson and Adam Duvall went deep back-to-back.

Ryu pitched a clean first inning and then worked around a leadoff double by Donaldson in the second inning, thanks to a pop out and two line outs.

Ryu wasn’t so lucky in the third, after Adeiny Hechavarria opened things up with a double to right field.

A sacrifice bunt and a walk put runners at the corners for Ozzie Albies, who golfed a low inside fastball down the left field line for a two-run double and put the Braves up 2-0.

Matt Beaty single-handedly evened the score for the Dodgers, first with a solo home run in the fourth and then an RBI single in the fifth.

With the game tied at 2-2, Ryu threw a three-up, three-down fifth inning, which included two strikeouts.

Ryu began the sixth by striking out Freddie Freeman, but the bottom fell out quickly for the left-hander.

First, Donaldson drove a high fastball over the right-center field for a solo shot that broke the tie. Then Adam Duvall went back-to-back, fouling off three pitches at a 2-2 count before blasting one over left-center for a 4-2 lead.

Ryu retired Charlie Culberson on a soft grounder for his final out of the game, as Joe Kelly came out of the bullpen to replace him.

Max Muncy’s solo home run in the seventh brought the Dodgers back to within one at 4-3, but the Dodgers couldn’t muster any more offense.

Ryu made 101 pitches, 66 of them for strikes. He struck out five and walked one.