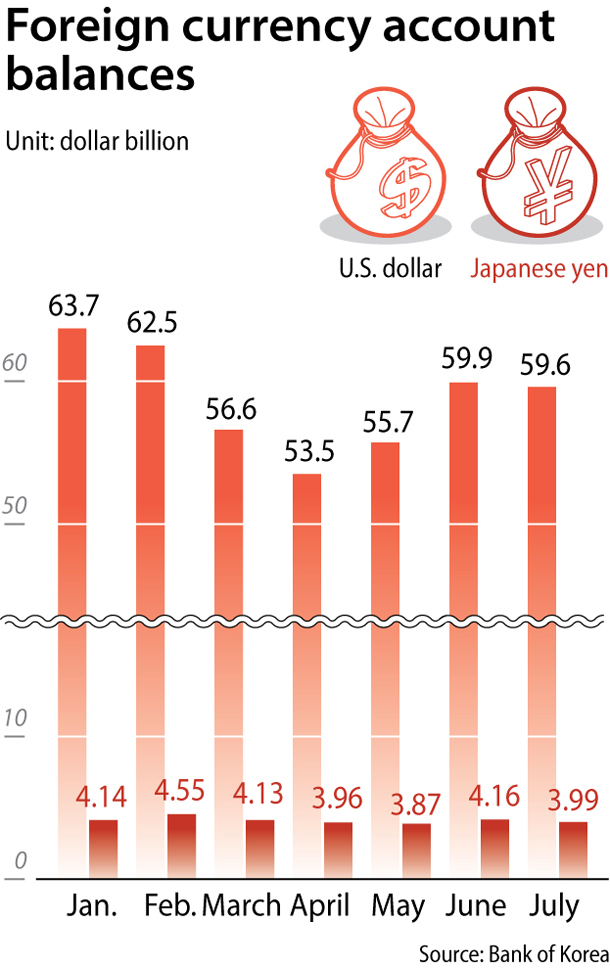 For the first time in three months, foreign currency account deposits have fallen.

Balances at the end of July totaled $69.7 billion, according to the Bank of Korea on Monday. That’s a 1 percent drop from the previous month, or $710 million less than in June.

Foreign currency deposits are defined by the bank as those owned by Koreans or foreigners who have lived in Korea for more than six months.

In May and June, foreign currency deposits rose rapidly as savers sought safer assets amid growing concerns about a weakening economy. But sentiment quickly turned following the rapid strengthening of the Japanese yen and the dollar.

Among foreign currencies, dollar holdings fell the most.

Last month, the balance in dollar accounts totaled $59.6 billion. That’s a half a percent drop from the previous month’s $59.9 billion, or $300 million less. Dollar holdings are 85.5 percent of all foreign currency holdings in Korea.

Japanese yen holdings are 5.7 percent of the total. They are down 4 percent, or $170 million, compared to June.

Holdings in other currencies, such as the euro and the yuan, fell as well, but by less.

Both corporations and individuals sold off their foreign currency holdings.

Corporate accounts, which hold 79.1 percent of all foreign currency balances, last month stood at $55.1 billion. That’s a 1 percent, or $550 million, less than in June.

The central bank said the drop could have been more severe.

Foreign currency deposits could further shrink as the won has depreciated amid growing fears of a global recession. Since the beginning of this month the won has been trading at 1,200 won against the dollar, while the Japanese yen has further appreciated to around 1,130 won against 100 yen.

The depreciation of the won against these foreign currencies is also affecting the stock market. Foreign investors have been on a selling spree over the last 13 consecutive trading days. It is the longest selling streak in three and a half years. The last time foreign investors sold off shares for such a long period of time was between Jan. 7 and Jan. 26, 2016, when they dumped shares for 14 consecutive trading days.