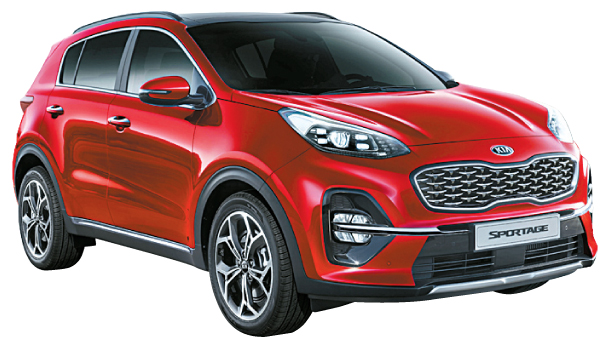 Kia Motors released an upgraded version of its popular Sportage sport utility vehicle in Korea on Monday as it races to keep up with growing global demand for SUVs.

The automaker said in a statement Monday that the updated version of the Sportage comes with an enhanced exterior design and a range of convenient features.

The new Sportage comes in gasoline and diesel trims and is covered with chrome accents on its radiator grille and fixtures on the front, back and sides. The car is equipped with a seat belt reminder system and an integrated automotive cockpit system, which controls interior temperature, ventilation and steering wheel heating.

The launch of the new Sportage SUV is the latest effort by Kia Motors to bolster its SUV lineup, which currently includes the Mohave, Telluride, Sportage, Sorento, Stonic subcompact, Niro and Soul boxcar.

The company has been selling fewer vehicles this year despite strong demand for the Telluride SUV and Soul in the United States. Kia Motors sold a total of 1.35 million cars worldwide in the first half of this year, down 2.4 percent from 1.39 million units in the same period a year earlier.

Like many automakers in Korea, Kia Motors has been focusing on producing SUVs to report better sales and earnings results.

Having recently started mass producing the Seltos compact SUV at its first factory in India, the automaker is also preparing to officially launch the upgraded Mohave SUV in Korea next month.