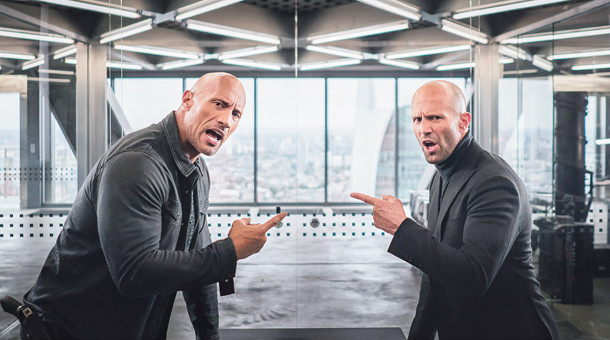 Hollywood blockbuster “Fast & Furious Presents: Hobbs & Shaw” shot to the top of the local box office after a two-week reign by local films.

The action film attracted over 1.1 million people to theaters in showings at 1,311 screens during its debut weekend. The “Fast & Furious” spinoff delighted action lovers who cheered on the two heroes - played by Dwayne Johnson and Jason Statham - on their way to victory over the bad guys, who stood no chance against the two elite spies.

In this spinoff, the two unlikely allies, veteran cop and spy agent Luke Hobbs and an ex-agent Deckard Shaw, grudgingly team up to save the world from a terrorist organization. The terrorists plan to release a fatal virus that could nearly wipe humanity off the face of the planet unless they get to it first and destroy it. However, complications arise when Shaw’s sister Hattie Shaw - another agent - finds out about the organization first and injects herself with the virus to become a dormant carrier. Now the trio must work together to find an extraction device and safely destroy the virus while the fate of humanity sits in the palm of their hands.

“The Battle: Roar to Victory” rose to second place with 792,000 people watching the film in 1,183 screens. The ongoing diplomatic tension between Korea and Japan created more interest in the film, combined with the film’s touching story about the soldiers of the Independence Army sacrificing everything they have for their nation’s freedom from Japanese colonialism (1910-1945). The film has sold a total of 4 million tickets as of Monday afternoon. 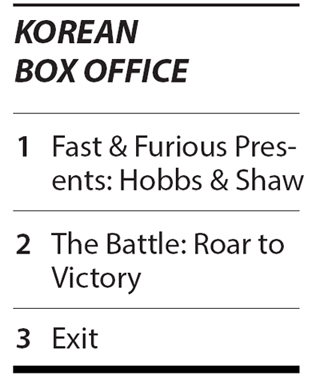 Apocalypse-comedy “Exit” dropped to third place over the weekend, selling 770,000 tickets over 1,042 screens. Although it did not perform as well as it did in the previous two weekends, the film has managed to sell a total of 7 million tickets in three weeks, bringing it closer to the significant 10-million-ticket-sales-mark.

Local animated film “My Tyrano: Together, Forever” debuted in fourth place, drawing 65,000 moviegoers to 511 screens. Set in a time when dinosaurs are on the brink of extinction due to a sudden ice age, two dinosaurs - Punon and Tyrano - come together unexpectedly to find their “heaven,” a mythical place revered by all dinosaurs where it is said that they can be protected from cold and hunger for all eternity.

Last but not least, horror film “Warning: Do Not Play” gathered over 50,000 people to 421 screens. Starring actors Seo Yae-ji and Jin Sun-kyu as Mi-jung and Jae-hyun, the story revolves around rookie director Mi-jung’s obsession over a horror film which was said to have been banned from screening due to its unmeasurable cruelty.

Although its film director Jae-hyun warns her to stop her search if she doesn’t want to “lead a life more terrible than death,” it seems that his warning will have no avail for Mi-jung who’s been preparing for her debut horror film for eight years.