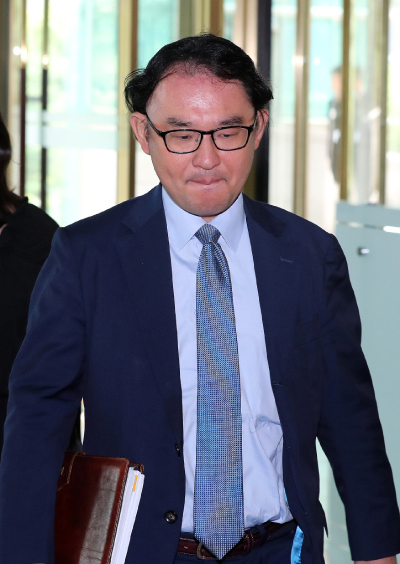 Tomofumi Nishinaga, a minister for economic affairs at the Japanese Embassy, appears at the Korean Ministry of Foreign Affairs building in downtown Seoul on Monday. [YONHAP]

Korea’s Ministry of Foreign Affairs summoned a diplomat from the Japanese Embassy in Seoul on Monday to demand an explanation of Japan’s disposal plans for contaminated water at its stricken Fukushima nuclear plant.

The move came about two weeks after Shaun Burnie, a nuclear specialist with Greenpeace Germany, raised fresh concerns about alleged plans by the Japanese government to dump over 1 million tons of radioactive water stored at the Fukushima nuclear plant into the Pacific Ocean, warning it would affect Korea.

A massive earthquake and tsunami struck Japan on March 11, 2011, causing a meltdown at the Fukushima Daiichi nuclear plant.

Tokyo Electric Power Company, the state-run operator of the plant, has said it will run out of space to store the contaminated water by 2022.

Last October, Seoul sent what’s called a non-paper, an informal diplomatic note, to Japan to relay its concerns and ask about the situation, the ministry said.

Tokyo informed Seoul it would explain the issue to the international society eventually, according to the ministry, effectively ignoring Korea’s concerns.

The note verbale given to the Japanese diplomat Monday is of a higher level of seriousness than the non-paper given to Tokyo last year.

Officially though, the Foreign Ministry says the Fukushima issues have nothing to do with the trade war, but local pundits believe otherwise.

Kwon Se-jung, director general for climate, environment and science diplomacy affairs at the Korean Foreign Ministry, summoned Tomofumi Nishinaga, a minister in charge of economic affairs at the Japanese Embassy in Seoul, to the ministry building in Gwanghwamun, central Seoul, at around 11 a.m. Monday to extend Korea’s note verbale.

The ministry told local reporters in a press briefing that through the note verbale, Seoul asked Tokyo to verify claims from Greenpeace and to give a formal response on its disposal plans for contaminated water at the Fukushima nuclear plant.

It also informed Japan that Korea was very concerned about how that disposal plan would affect Korea and suggested joint efforts to find ways to safely discharge contaminated water.

In the aftermath of Japan’s trade restrictions against Seoul, some Korean lawmakers and activists have been calling on a boycott of the 2020 Tokyo Summer Olympics, citing concerns about radioactive contamination.