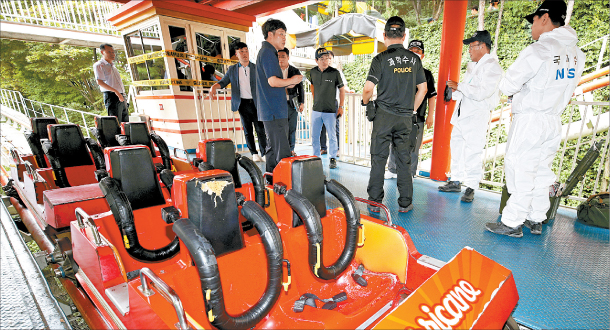 Police officers and forensic investigators examine the Hurricane roller coaster ride at E-World in Daegu Monday after a 22-year-old part-timer lost a part of his right leg last Friday. [NEWS 1]

The E-World amusement park in the southeastern city of Daegu apologized on Monday for a ghastly accident in which a 22-year-old part-time employee lost his right leg below the knee after getting it stuck in a moving roller coaster last week.

In a statement issued three days after the tragedy, E-World vowed to pay for all medical treatments for its employee. E-World added it would actively cooperate in ongoing police investigations and devise measures to improve safety in the amusement park.

It is still not known exactly how the victim was maimed. Daegu police said Monday they were unable to question the worker given his state of mental shock.

Last Friday at around 7 p.m., the victim was working at one of E-World’s most popular rides, the Hurricane roller coaster. He had worked at the amusement park for five months after being discharged from compulsory military service.

According to police, he was about to change shifts with a 20-year-old colleague, before the victim made sure all the passengers were safely buckled in their seats of the four-car roller coaster.

Just as the roller coaster started to take off, the victim, who was himself in the last car, fell off the ride about 10 meters (33 feet) away from the starting point. His right leg fell between the rails and the wheels of the car, which severed it, said police.

It is unclear why the worker was in the last car, but officers believe he was following a bad habit of workers on that ride. They would check passengers’ safety then hop in an empty car and get off right before the roller coaster leaves the main base. That brought them to the exit, where they would help passengers off the ride at its completion.

Police said it was only after the roller coaster returned to the main base that the 20-year-old part-timer realized his co-worker was injured. The victim was immediately transported to a nearby hospital, but doctors were unable to reattach the right leg.

Doctors treating the victim told the JoongAng Ilbo Monday that they closed the wound and were focusing on treating the injured leg. The victim will soon be offered a prosthetic leg and undergo rehab, along with psychological therapy, they told the paper.

Daegu police said they were planning to summon managers and other workers at E-World to check whether they followed safety rules.