The blue sculptures, titled “Connect With Me,” are the graphs of the controversial cryptocurrency bitcoin’s value. They are part of the solo show of the famous Danish art collective Superflex at Kukje Gallery Busan. Over the sculptures is seen the “Bankrupt Banks” wall piece, a long black panel which lists the names of financial institutions that collapsed since the financial crisis, including Korean ones. [KUKJE GALLERY]

Visitors to Kukje Gallery’s Busan branch will encounter three sculptures that look like blue pipes with curves and corners. The first stands low and has smooth curves, while the second one stands higher with sharp corners and the third is even higher with even sharper corners.

Actually, the sculptures, titled “Connect With Me,” are graphs representing the value of cryptocurrency bitcoin, which has fluctuated ferociously in recent years, according to the Danish art collective Superflex who are behind the sculptures. They are part of the team’s solo show titled “In Our Dreams We Have a Plan,” which started last week.

“On one side, bitcoin represents a kind of Utopian dream of a free society where we can contract free and communicate free [as opposed to central banking systems]. On the other side, it may be another capitalist nightmare,” Jakob Fenger, one of the collective’s artists, told press last Wednesday.

Superflex is made up of Fenger, Bjørnstjerne Christiansen, and Rasmus Nielsen. Christiansen also attended the press preview. 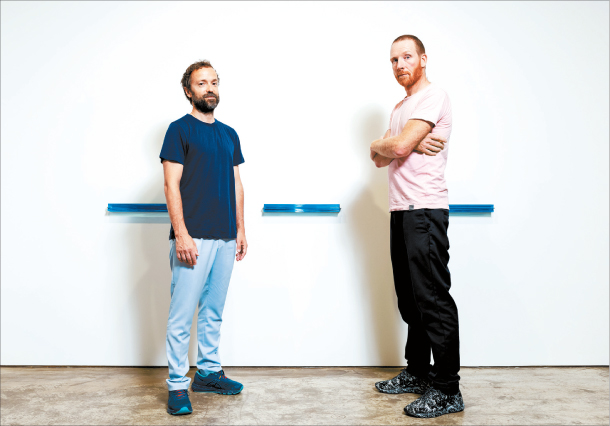 Over the sculptures are geometric abstract paintings of cheerful primary colors hanging on the wall. In fact they are Superflex’s “Bankrupt Banks” painting series, which portray the logos of banks that went bankrupt in the aftermath of the 2008 global financial crisis. “Ironically, many of these logos [give] us hope or confidence about the future,” Fenger said.

On the opposite wall is the “Bankrupt Banks” wall piece, a long black panel which lists the names of financial institutions that have collapsed since the financial crisis.

With those works, Fenger said the collective intends to highlight the limits and fragility of humankind’s dreams about the future, associated with economic growth and success in many cases. The economy-oriented “better future” is even threatening nature and the earth, he said, pointing to the art collective’s other piece on view, “Apres Vous, Le Deluge.” The work consists of three blue glass sculptures on the wall that indicate the sea level rise caused by climate change.

Meanwhile, as part of the show, Praha 993, a nearby pub, will sell “Free Beer Version 7.0” which was made with an open-source recipe and design provided by Superflex under a Creative Commons (Attribution-ShareAlike 2.5) license. Anyone is free to brew their own “Free Beer” using the shared recipe and make a profit.

Superflex has emphasized that it uses art as a tool for changing lives and public situations. As part of these efforts, the collective recently installed “One Two Three Swing!” at the Dora Observatory in Paju, Gyeonggi, which overlooks the demilitarized zone (DMZ) and North Korea. The “sculpture infrastructure” has multiple three-person swings in which people need to “move together” to enjoy the swing, according to Fenger. “Three is the minimum number of people to make a group,” the artist said. “When we move together, we can change things.”