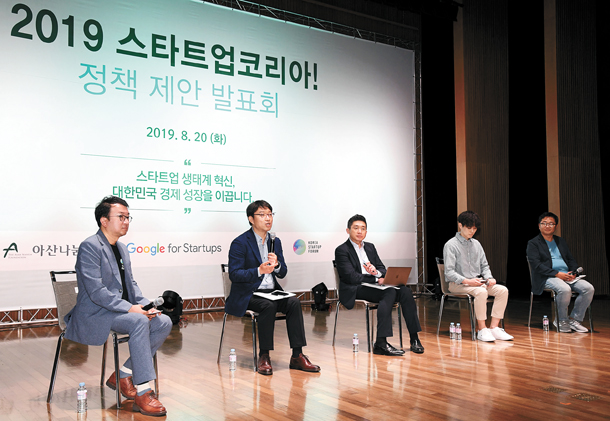 Last month, three-year-old start-up Veluga halted its business for the second time. The subscription service regularly delivered craft beers and food to the homes of its users. Under Korean law, alcohol can only be home delivered if it is “supplementary” to food, like chicken.

But a gray zone remained in terms of what defined “supplementary” - was it quantity or price?

This time, the start-up called it a day.

“We received a lot of legal advice and made requests to relevant government offices multiple times for clear guidelines, but they postponed answering us and ultimately said the service was against the law,” said Veluga’s co-founder Kim Hyun-Jong. “We wouldn’t have had to close twice if they told us the boundaries on what we can and cannot do.”

Veluga’s case is only one example. 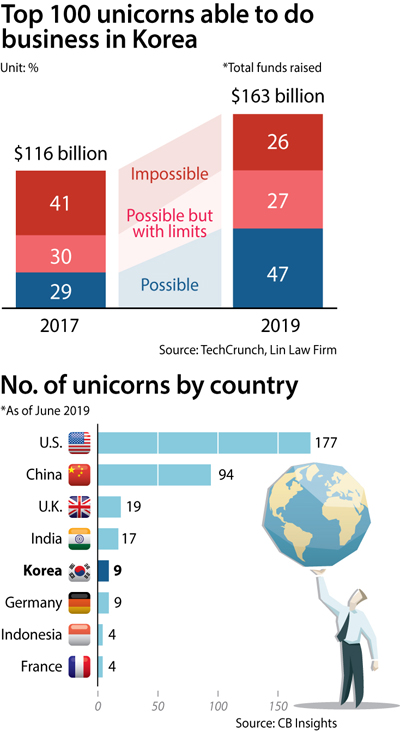 According to a study published Tuesday, 31 of the top 100 global unicorns would not have even gotten off the ground in Korea. Eighteen would have been able to do business, but with limits.

In the past five years, Korea’s start-up scene significantly grew in size. The number of unicorns jumped from two to nine. In 2017, Korean ventures hired a total of 760,000 people - an equivalent to the country’s top five conglomerates.

“Start-ups are becoming more important in Korea’s economy. And yet, do we have an ecosystem that helps our start-ups to thrive? Honestly, the answer is ‘no,’” said Ahn Hee-jae, a Bain & Company consultant who conducted the study with the country’s four start-up support institutes: Asan Nanum Foundation, Google for Startups, the Startup Alliance and Korea Startup Forum.

“In terms of regulation barriers for starting business, data infrastructure, investment environment and the labor pool, Korea’s start-up ecosystem falls behind many countries,” he added.

A fundamental obstacle is the “positive” regulation framework, in which companies only do what is specifically permitted by law. This means that new business models that are not clearly defined in the law will be blocked or obliged to endure a long review process to have its legality confirmed by relevant government offices. In a “negative” regulatory framework, anything not specifically prohibited is allowed, though heavy penalties are imposed on those crossing any lines.

“A lot of start-ups create businesses that never existed before, which is why the question of a ‘negative’ or ‘positive’ framework matters,” the report said. “It’s no coincidence that countries with negative frameworks, like the United States, China, the United Kingdom and India, have more unicorns than Korea, Germany and Japan, with positive frameworks.”

Another problem raised was the shortage of software engineers in the country.

“This is the biggest problem start-ups founders are facing - what’s more, this phenomenon will only aggravate in the future,” said Ahn.

According to the report, top engineering schools in Korea, except KAIST, did not increase the number of freshmen between 2011 and 2018. Many highly-qualified students prefer medical school over engineering, while they often long for a stable job at a conglomerate or in the government.

“It’s true that things are getting better than in the past, but the gap is still big when compared to other advanced countries,” said Ahn. “We’re in a global competition, not a local one. We need to prepare the best environment possible to win this game.”