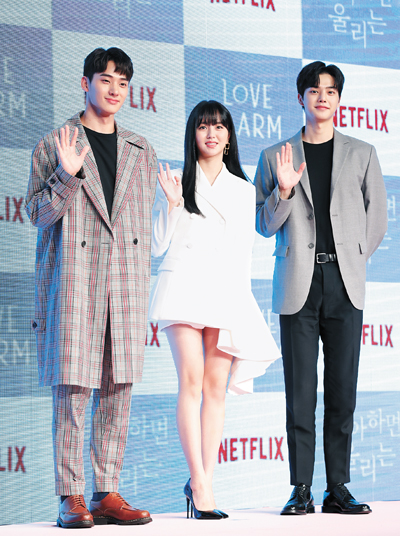 Imagine being able to know whether someone likes you or not by opening up a smartphone application.

That’s a reality in the world that web comic author Chon Kye-young created - a world where you don’t have to express your emotions because the app will automatically share your special feelings for someone and send you an alarm if the person you like is within 10 meters.

Within this world, three high schoolers - Kim Jojo, Hwang Sun-oh, and Lee Hye-young - become entangled in a love triangle that becomes more complicated through the creation of this app.

Netflix has turned the web comic series into an original series directed by Lee Na-jeong and starring Kim So-hyun, Jung Ga-ram and Song Kang, much to the excitement of the fans of the original series.

“I am a huge fan of the original comic [myself],” confided director Lee at a press conference held for “Love Alarm” on Wednesday. “[But for the series] I concentrated on showing more realistic side effects of the app, which can be more dynamic than it seems.”

Kim, also a fan of the webtoon series, didn’t think that she was match for the role of Jojo at first. “I was originally cheering for someone else to play the part,” said Kim.

“But when the role was offered to me, I couldn’t resist taking it because I am such a huge fan myself. I was tempted to find out how I could portray Jojo’s character, who seems weak and frail on the outside, but also has a steely personality that gets her through her difficulties.”

Song, who plays Hwang Sun-oh, talked about the burden he feels playing a role with such a huge fanbase. “[It was especially difficult because] Hwang isn’t really the talkative type,” said Song.

“So I debated a lot about how to express his emotions. At the end, I decided to focus on his momentary expressions, which is enough [for viewers] to be able to get a glimpse at his feelings.”

The director added that she received a lot of help from Chon, especially in creating the Love Alarm app to be used in the drama. “Designing the app wasn’t easy. I wanted the app to look and work as if it actually exists, but also wanted it to be romantic and gender-blind. Juggling that balance was hard, which is why I sought a lot of advice from Chon.”

The series is expected to be released worldwide simultaneously in 190 countries. The trio expressed their excitement for being a part of a Netflix original series for the first time.

“I’m curious to find out how viewers from overseas will respond to this series and how their reactions might differ from local [viewers],” said Jung.

“I am still not quite familiar with the concept of uploading a project to a [global] platform,” Kim said.

“I think the reality of it all happening will start to kick in as people post their reviews after the episodes are released. I’ll be waiting for them.”

When asked whether or not the director has any plans for another season, Lee pointed out that it depends entirely on viewer reactions. “The ending for this show is different than other local dramas,” Lee said.

“The ending will have the viewers wondering about Jojo’s decision [between Hwang and Lee].”

The first season, which consists of eight episodes, will become available on Netflix on Thursday.