Carbon fiber industry gets a boost

Carbon fiber industry gets a boost 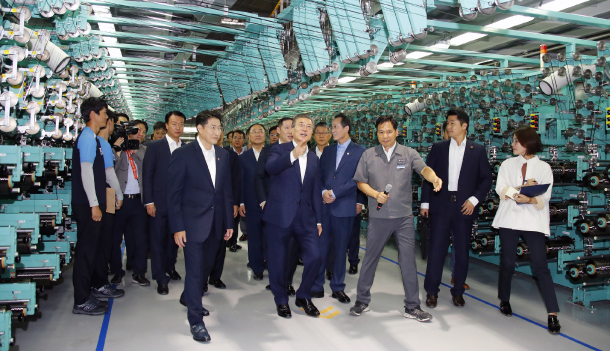 Hyosung Group announced Tuesday it will invest 1 trillion won ($828 million) into its carbon fiber factory in Jeonju, North Jeolla, to increase the facility’s production capacity more than tenfold to become the third-largest producer of the material in the world by 2028.

Moon’s visit comes as carbon fiber is expected to be one of the products that will be subject to Japanese export restrictions following Korea being excluded from the neighboring country’s so-called white list from Aug. 28.

Carbon fiber is one of the key materials necessary for the hydrogen economy strongly promoted by the Moon administration. The material, which is one-fourth the weight of steel but 10 times stronger, is used in making hydrogen tanks for hydrogen fuel-cell vehicles.

It is the second visit by Moon to companies producing goods that Korea has depended on Japan for. Earlier this month, Moon visited SBB Tech, a company that has succeeded in localizing the manufacturing of precision control decelerators, which had mostly been imported from Japan.

According to Hyosung Chairman Cho Hyun-joon, the investment will be used to expand the Jeonju facility’s production capacity by 12 times from the current 2,000 tons to 24,000 tons by 2028. While the factory, operated by Hyosung’s advanced materials producing arm Hyosung Advanced Materials, currently operates only one production line, the group plans to operate 10 by 2028.

“We jumped into developing our own technology because we saw potential in carbon fiber,” Cho said. “As the hydrogen economy has opened up new markets for the carbon fiber industry, we will bolster our business to make Hyosung play a key role in making Korea’s materials industry stronger.”

The company also said it will create more than 2,300 new jobs by expanding the carbon fiber business. Currently, 400 employees either work at the factory or engage in research or sales of carbon fiber.

The market prospects for carbon fiber are positive, as the material is used not only for hydrogen fuel-cell cars but also in aerospace parts, wind turbines and various defense products.

After the Hyosung facility, Moon also visited food processing company Harim in Iksan, North Jeolla, as it announced plans to make an 880 billion won investment into its Iksan facility and create some 2,000 jobs by 2024.