If your mouth isn’t numb yet, try some mala chicken

If your mouth isn’t numb yet, try some mala chicken 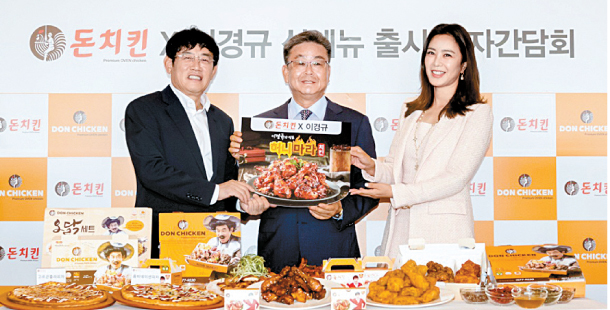 As mala madness sweeps Korea, chicken franchise Don Chicken is offering its own take on the popular Chinese sauce with its new Honey Mala Chicken.

Don Chicken on Tuesday unveiled its new honey mala flavor in collaboration with comedian Lee Gyeong-gyu. Mala is a spicy Chinese sauce known to numb the mouth. Its popularity in Korea was led by malatang, a soup-based dish that involves customers picking their own ingredients to boil in a broth.

Don Chicken’s honey mala version is more spicy than sweet, and although the taste is not especially reminiscent of the mala sauce you might find in a malatang restaurant, it does pack enough of a kick to leave a sense of numbness in your mouth and tongue for several minutes.

“We hope to take Don Chicken to another level through the introduction of the new menu,” said Lee, who is also a director at Don Chicken.

“Korean foods are especially well-received in Vietnam right now due to the popularity of Korean culture and the influence of Park Hang-seo, the head coach of Vietnam’s national football team,” said a spokesperson for Don Chicken.

Lee said Don Chicken not only sells chicken in Vietnam but other Korean dishes including tteokbokki and kimchi stew.

Although mala is a Chinese sauce, Don Chicken argues that Honey Mala Chicken should be seen as a Korean dish since mala is so well loved by Koreans.

“We believe everything Koreans love is Korean food, regardless of where it originates,” said the spokesperson.

Although the popularity of mala has started to wane as summer starts to wind down, Lee isn’t concerned about how people will react to the new flavor.

“Although the popularity of mala seems to be at the end, spicy tastes are never out of fashion,” said Lee.