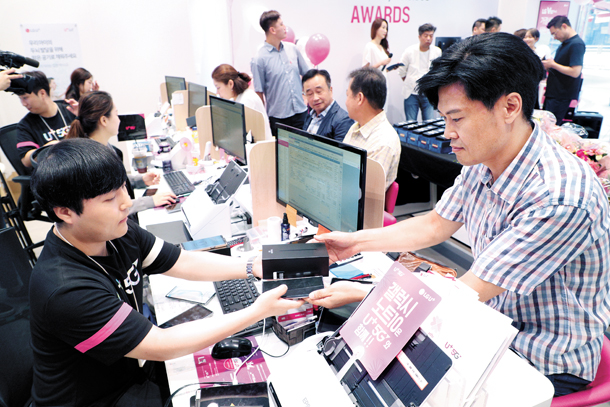 A customer receives the latest Samsung Electronics’ phablet, the Galaxy Note10, at an LG U+ store in Jonggak, central Seoul, on Tuesday. While mobile carriers have already begun distributing the Galaxy Note10 to customers that preordered the phone, official sales kick off on Aug. 23. [YONHAP]

More than 1.3 million Samsung Electronics Galaxy Note10s have been preordered in Korea, more than double the orders for the Note9 last year.

Korea’s three mobile carriers - SK Telecom, KT and LG U+ - received pre-orders between Aug. 9 and Aug. 19. During this period, more than 1.3 million phones were ordered, more than double the number of Note9s ordered last year. Samsung refused to disclose how many Note9s were preordered last year.

The milestone of one million pre-sold units was reached on Aug. 17, Samsung said on Tuesday.

The first batch of Note10 phones were delivered to customers on Tuesday. The remaining orders will be sent out in the next few days.

“So far, the reactions have been much better than previous [Samsung] models,” said a mobile carrier source. “The deliveries will be completed by order but some may have to receive the phone after the official release.”

The Note10’s official release date is set for Aug. 23, when phones will hit the shelves in stores across Korea.

The Note10 is the first Samsung Electronics phablet to come in two size variations - the Note10 with a 6.3-inch screen and the Note10+ with a 6.8-inch screen. While the Note10+ was made to be Samsung’s biggest phone to date, the Note10 was designed to be slightly smaller than the previous Note9’s 6.4-inch screen - an attempt to cater to customers that find larger phablets inconvenient.

However, Samsung’s pre-order analysis show that the larger phone actually proved to be much more popular: Two thirds of purchases so far were for the Note10+. Specifically, the 256-gigabyte Galaxy Note10+ in the color “Aura glow” has proven to be the most popular option.

Another interesting point in Samsung’s Note10 preorder results is a noticeable increase of young female customers. Traditionally, the phablet series had been much more popular among men.

According to data from mobile carrier KT, half of the customers that placed pre-orders for the Galaxy Note10, the smaller version, were women. This was a high figure considering that percentage of female customers for Samsung’s Note phones has always hovered below 40 percent. The proportion of 20-something customers also increased as well, accounting for one third of orders.

But data from SK Telecom showed that male customers in their 30s to 40s remained the loyal customer base, taking up half of the carrier’s preorders.

Mobile carriers set their official subsidiaries for the Galaxy Note10 on Tuesday at between 280,000 won and 450,000 won.