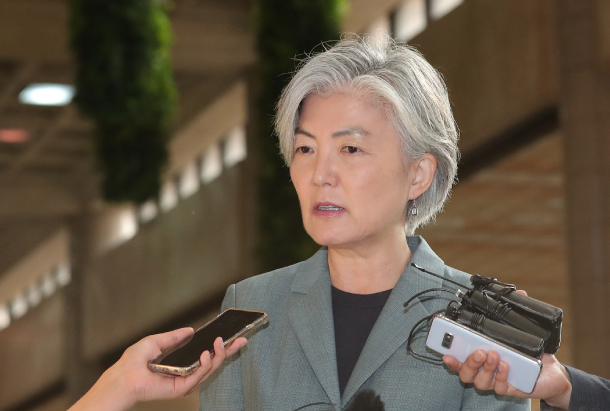 Foreign Minister Kang Kyung-wha speaks to reporters at Gimpo International Airport on Tuesday before departing for Beijing to attend meetings with her Japanese and Chinese counterparts to discuss trilateral issues amid rising regional tensions. [NEWS1]

Kang was scheduled to meet Chinese Foreign Minister Wang Yi Tuesday evening and Japanese Foreign Minister Taro Kono this afternoon. Kang’s meeting with Kono is widely expected to be the highlight of her tour given the strained ties between the neighboring countries and the upcoming deadline for renewing their bilateral military intelligence-sharing accord, the General Security of Military Information Agreement (Gsomia).

Signed in November 2016, Gsomia is renewed automatically every year unless either of the two countries decides to scrap the pact. The country wishing to walk out must give at least 90 days’ notice, meaning the last opportunity to do so before the latest agreement expires is this Saturday.

Seoul has been toying with the possibility of withdrawing from the agreement in retaliation of Japan’s removal of Korea from a so-called white list of countries receiving preferential treatment in trade.

Kang told reporters at Gimpo International Airport in western Seoul before boarding her flight to Beijing that Seoul was “still reviewing” its decision about Gsomia, adding “nothing has been decided yet.”

A Blue House official who spoke to reporters on the condition of anonymity said the Korean government would decide based on various factors, including Japan’s “attitude” and the “qualitative and quantitative assessment of military intelligence” shared between the two countries.

Kang’s meeting with Kono will likely be a big factor in Seoul’s decision on Gsomia.

During the meeting, local government officials said Kang is expected to denounce Tokyo’s removal of Seoul from its white list, which officially goes into effect next Wednesday, and urge the Japanese government to withdraw its decision, though Japanese media outlets have reported Tokyo was unwilling to back down before Seoul reneges on the Korean Supreme Court rulings ordering Japan to compensate victims of forced labor.

Seoul sees Tokyo’s export restrictions against the country as backlash for the Supreme Court’s rulings last year ordering Japanese companies to pay damages for Koreans’ forced labor during World War II. Japan maintains that a 1965 accord normalizing relations with Seoul, which provided an economic cooperation fund, settled all compensation matters.

Some sources in the ruling Democratic Party, however, say Seoul has tentatively reached the decision to maintain Gsomia regardless of the outcome of Kang’s meeting with Kono, especially after President Moon Jae-in gave a national address on National Liberation Day last Thursday saying he wishes to improve ties with Japan.

In an annual speech commemorating the day Korea gained independence from Japanese colonial rule in 1945, Moon said he would “gladly join hands” with Japan if Tokyo chose the path of “dialogue and cooperation.” Kono effectively rejected Moon’s olive branch the next day, saying he’d like Moon to stop what he called Seoul’s violation of international law, apparently referring to the 1965 bilateral claims agreement.