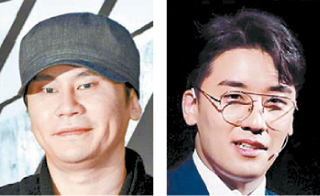 “Yang’s schedule often involves overseas trips, but we need him to be in the country so that we can investigate him and summon him for questions,” a police officer told the press on Tuesday.

Both Yang and Lee Seung-hyun, a former member of boy band Big Bang who went by the stage name Seungri, were booked earlier last week on allegations that they engaged in habitual gambling overseas on top of violating the foreign exchange transaction law to secure gambling funds.

Earlier this month, police were given a tip that Yang and Lee had gambled illegally overseas, namely in one of the VIP rooms at the MGM Grand Las Vegas Hotel and Casino, which is illegal for Korean citizens, who are only allowed to gamble at the state-authorized Kangwon Land in Gangwon.

Yang faces the additional charge of soliciting sex services for foreign investors in 2014, for which he has been booked by the police in July.

A woman told an MBC TV program “Straight” in May that she was at a dinner in July 2014 with Yang and two singers of his entertainment company and two guests from Southeast Asian countries, along with 24 other women, of whom she said more than 10 were from a brothel in Gangnam District, southern Seoul.

Lee was also booked in March for soliciting sex services in 2015 for foreign investors visiting Korea and again in 2017 while he was in the Philippines and was placed under a travel ban then.

Police suspect that Lee called up more than 10 prostitutes to entertain a group of investors from Japan visiting in Korea in December 2015.

They said they obtained testimonies from some women who were present at the time.

Lee also allegedly called up eight women from a brothel in Palawan, the Philippines, during a party to celebrate his birthday in December 2017.

Lee has been entangled in a massive sex scandal since earlier this year when the nightclub he partly operated called Burning Sun, located in Gangnam District, southern Seoul, which became embroiled in allegations involving prostitution and illegal drugs.

While police found that clubbers brazenly took drugs including methamphetamines while partying there, they could not find evidence of the systematic distribution of such substances on the part of the club owners.

Jung and Choi both shared videos they filmed of their sexual encounters with women without the women’s consent, leading to Jung’s arrest and investigations into Choi.

The police requested an arrest warrant on Lee in May, but the request was dismissed by a local court.