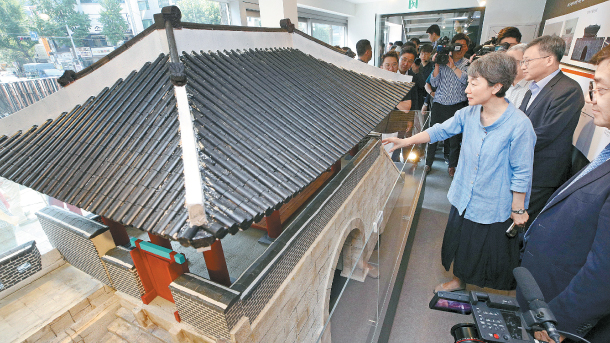 Chung Jae-suk, right, chief of the Cultural Heritage Administration, examines the miniature of Donuimun, one of the four main old gates that were part of the wall that surrounded the Joseon-era (1392-1910) capital, at Donuimun Museum Village in Jongno District, central Seoul, on Tuesday. The gate was also virtually restored with the latest digital technology around a century after it was demolished during Japan’s 1910-45 colonial rule. With augmented reality technology, people can see the restored gate image on their smart phone. The Seoul metropolitan government held a ceremony to mark the completion of a nine-month project to restore the gate with digital technology at Donuimun Museum Village, which stands near the gate’s original site. [YONHAP]