On Jan. 20, 2018, the International Olympic Committee (IOC) approved an agreement between South Korea and North Korea to combine their women’s hockey teams for the PyeongChang Winter Olympics.

The decision came just under three weeks before the opening ceremony for the first Winter Games to take place in South Korea, and three days after the inter-Korean deal was struck. The IOC announced 12 North Korean players would join the existing 23-player South Korean team and stipulated that at least three North Koreans dress for each game.

The decision, reached by the Korean and IOC leaders with the speed of a slap shot, was met with outrage by the South Korean public, who felt their players were being unfairly forced into an impossible situation by bureaucrats and political leaders who knew nothing about the sport.

After PyeongChang 2018, the unified Korean hockey team, the first of its kind in Olympic history, was hailed as a symbol of peace and harmony on the divided peninsula. The suits who brought the teams together were busy patting themselves and each other on the back. 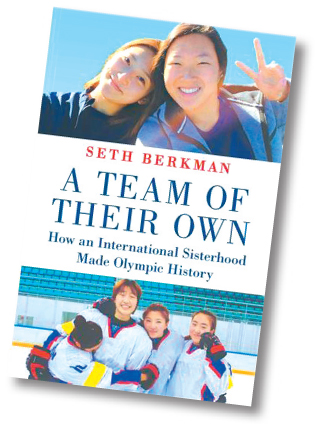 This image provided by Hanover Square Press/HarperCollins Publishers on Aug. 21, 2019, shows the cover of a new book by Seth Berkman, “A Team of Their Own: How an International Sisterhood Made Olympic History.” [YONHAP]

But what did the principal figures, the South Korean players and their coaches, really feel about this situation? They collectively put on a brave, stoic face and said all the right things. But deep inside, then head coach Sarah Murray and her players were seething.

In his book “A Team of Their Own: How an International Sisterhood Made Olympic History,” author Seth Berkman offers revealing and fascinating behind-the-scenes tales about sacrifices these players made to help the joint team on and off the ice, and about their personal journeys that led to their moment in Olympic history.

Berkman, a contributing reporter at The New York Times, deftly weaves historical and cultural backgrounds of Korea into the stories of how these young women, some of them teenagers, stood up for themselves and for each other in the face of adversity and challenges.

This isn’t simply a sports book. Rather, it’s a book about inspiring and courageous women who just happened to be hockey players.

South Korea received its spot in the women’s hockey tournament at the PyeongChang Winter Olympics as the host country. The team wasn’t good enough to have qualified, and given the shallow pool of women’s hockey talent, South Korea was unlikely to play in future Olympic Games unless it hosted another one.

PyeongChang 2018 promised to be the defining moment for South Korean hockey players, some of whom had suffered through lean years of losing games by nearly 30 goals.

With only weeks left before their first game, though, it was all taken away from them. While whispers of possibly combining the teams were first heard in 2017, South Korean players didn’t take them seriously at first. Murray told Berkman she found it “insulting” that political types even had the temerity to consider merging the two teams together because, “It just totally takes away from what our team’s been doing.”

With the tide of the public opinion turned against him, President Moon Jae-in paid a damage-control visit to the Jincheon National Training Center in Jincheon, North Chungcheong, to speak with the players before the Olympics.

Moon told the South Korean members of the unified team that their efforts to build up teamwork would create history. But the players weren’t interested in making history, and that set up an awkward photo-op, with several players displaying no emotion other than their thousand-yard stares.

Berkman does an outstanding job of capturing and preserving Olympic memories for them. The trust Berkman earned from the players and coaches is palpable throughout the book. His clean, vivid prose takes readers right to whatever scene he’s describing, be it on the ice in the heat of the Olympic competition or in small towns in Ontario or Nova Scotia in Canada where some South Korean players honed their hockey and English skills.