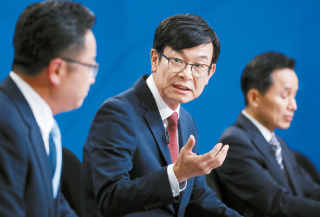 Blue House policy chief Kim Sang-jo said opportunities will present themselves over the next few months to ease tensions with Japan.

“There could be an opportunity for dialogue in September when the Japanese government reshuffles or the ruling party undertakes a reorganization,” Kim said on Wednesday while attending a media forum in Seoul.

“Whether Korea will attend the Japanese emperor’s coronation [at the end of October] and the level of any delegation sent by Korea will depend on how much progress is made on diplomatic dialogue.”

He said it won’t be easy to achieve progress in such short period of time.

“Until then, both countries will continue on strategic probing amid fog,” Kim said.

The Blue House policy chief accused the Abe administration of creating confusion in the Korean market with its trade restrictions, particularly the removal of Korea from Japan’s white list, which begins Aug. 28.

He asked the Korean public to remain calm over the Japanese measures, adding that the intention of the Japanese government is not inflicting direct damage on Korea by restricting export items.

“The hidden motive of the Abe government is creating uncertainty in the Korean economy by gripping the faucet on a total of 1,194 items,” Kim said.

He added that it is not right to overstate the damage resulting from the export restrictions.

“Although most of the items when compared to the past will take more time, they will be passed,” Kim said. “The point is to maintain consistency by lowering [Korea’s] external dependency by stabilizing the supply line.”

The Japanese government on Monday approved another export of extra ultraviolet photoresists, one of the three key materials restricted since July 4.

The first approval on the same material was made on Aug. 7, more than a month after the restriction was imposed. These three materials previously didn’t need the approval of the Japanese government to be exported to Korea.

In addition to photoresists, hydrogen fluoride and fluorinated polyimide are key materials used in manufacturing computer chips and displays.

The policy chief has questioned the motive of the Japanese government.

In a radio show earlier this month, Kim said the approval may be strategic positioning by the Japanese government so that it could claim that its restrictions don’t go against international trade rules and that they are only a stripping of previous privileges.

Kim during the forum on Wednesday said the Korean government has continued to propose a one-on-one meeting with Japan’s government.

“Of course this is the best solution in the case of our government, but it’s not the only solution,” Kim said. “We are ready to talk with various measures on the table.”

When asked about the government’s decision on the General Security of Military Information Agreement (Gsomia), Kim replied with caution.

“It is a very important issue involving security cooperation in North Asia and therefore can’t be easily decided,” Kim said. “[The Korean government] will make a very careful decision after thinking about it until the last minute on whether it is right to exchange sensitive military information with a country that claims it no longer can trust Korea.”