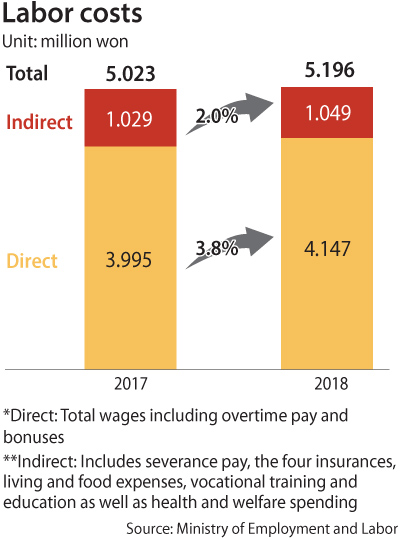 Labor costs rose their fastest in six years in 2018 as the government jacked up the minimum wage rate in an effort to stimulate growth and improve the quality of life for the country’s lower-wage earners.

According to a study by the Ministry of Employment and Labor released on Wednesday, last year, companies with more than 10 employees spent an average of 5.193 million won ($4,318.50) per month for each new hire.

The expenses not only include regular wages, overtime pay and bonuses but also indirect pay, including the four basic insurances - health, employment, industrial accident compensation and pension - and other health and welfare spending.

The study was conducted between May and June with roughly 3,500 companies.

Wages including bonuses grew 3.8 percent compared to the previous year to 4.147 million won from 3.996 million won in 2017. Indirect labor expenses were up 2 percent to 1.049 million won.

Welfare expenses were up 3.8 percent.

The increase in direct wages and mandatory insurances was related to the increase in the government’s minimum wage. The Moon Jae-in administration raised the minimum wage 16.4 percent in 2018, which was the highest in nearly two decades.

According to industry experts, a drop in recruitment-related spending indicates that last year companies were reluctant about hiring.

The burden was different for different companies.

The burden rose sharply for companies more sensitive to the increase in the minimum wage. Labor expenses grew between 6 and 8 percent in the wholesale and retail, construction, logistics, lodging, facility maintenance and restaurant categories, while wages grew between 0.3 and 3.4 percent for industries that are less affected by the higher minimum wage, including manufacturing, mining, utilities and finance categories.

Monthly labor expenses were the highest for utilities companies, at 8.82 million won last year, followed by the financial industry including insurance, at 8.77 million won. Manufacturing came in at 5.92 million won. The facility maintenance category, which includes jobs like security and cleaning, had the lowest labor expenses, at 2.55 million won a month on average. The lodging and restaurant category was the second lowest, at 3.35 million won.

The average labor expenses at large companies with more than 300 employees grew 1.5 percent to 6.32 million won.

For smaller companies with fewer than 300 employees, the average expenses were 4.28 million won, a 4.9 percent increase.

“The labor expenses of small companies are now 67.7 percent of those of their larger counterpart, a 2.1 percentage point rise compared to the previous year,” said an official at the Labor Ministry.

“This shows that the wage and welfare gap between small and big companies is narrowing.”