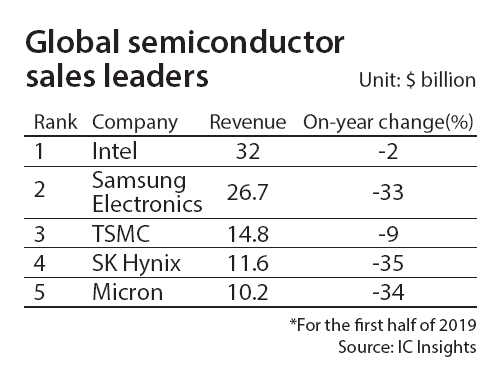 With memory chip prices continuing to fall, Samsung Electronics remained the No. 2 chipmaker in the world in the first half this year, according to data from market research firm IC Insights.

Although Samsung trails U.S. firm Intel in the overall ranking, it remains the leader in the DRAM and NAND Flash memory chip market, although the market as a whole has been retreating since late last year.

Intel, on the other hand, dominates in sales of central processing units (CPU), which act as the brain of digital devices where calculations take place and therefore are counted as non-memory semiconductors.

The memory chip market’s retreat was evident in on year revenue drops.

The top three memory chipmakers - Korea’s Samsung and SK Hynix and U.S. firm Micron - all saw their revenues for the year’s first half drop between 33 and 35 percent compared to 2018. Intel and Taiwanese foundry Taiwan Semiconductor Manufacturing Company (TSMC) generated less revenue, but their on year drop was narrower, at single digit percentages.

According to IC Insights data released Tuesday, Samsung sold $26.7 billion worth of semiconductors between January and June 2019, a 33 percent decline on year. During the same period, Intel’s semiconductor business made $32 billion, falling just 2 percent on year.

For quarterly revenue, Intel recovered the No. 1 spot in the overall chip market from Samsung in the fourth quarter of 2018 and has held on to it ever since. From 1993 to 2016, Intel was the world’s largest chipmaker before Samsung took the crown in 2017.

The market research firm expects Intel’s advance to continue through the rest of this year.

At SK Hynix, revenue in this year’s first half fell 35 percent on year to $11.6 billion. As a result, it fell to No. 4 in the global ranking after finishing last year in third place behind TSMC.