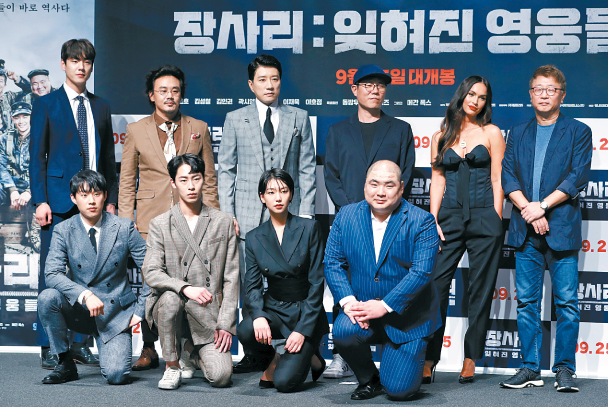 The Battle of Incheon is remembered as one of the most significant events of the Korean War (1950-1953) that led to a decisive victory in reclaiming Seoul from North Korea with the assistance of U.S. and UN forces.

In order to ensure a successful outcome, there was a feint operation, known as the Battle of Jangsari, put into place in order to stall and preoccupy the North’s attention while the South waited for outside help. As all the necessary military forces were needed to protect what little remainder of the land the South had, 772 students - with an average age of 17 - were recruited and trained for a mere two weeks before they were thrust onto the battlefield to fight the Northern forces in order to block the enemy’s supply route.

“I’ve heard about the battle and wanted to do more research on it after I decided to play the part [of the captain],” said actor Kim Myung-min at a press conference to promote the film “Battle of Jangsari” on Wednesday. “But because it was such a top-secret operation, there weren’t a lot of records about the event, which was sad because it’s thanks to these 772 soldiers that we are able to live in this country today.”

“I definitely felt the gravity of the story on set as it was told and the passion that director Kwak Kyung-taek used in telling the story,” agreed Hollywood actor Megan Fox, who plays a war correspondent named Meggie who records everything she sees, including the Battle of Jangsari. “I’m used to working with CGI robots, turtles and things of that nature where set time isn’t necessarily very earnest. [However] this is obviously when everyone involved was very reverent in the way the story was told because it was such an important history.”

Since they were creating a film dealing with historical facts, director Kwak said that he refrained from fulfilling his desires to try out new ways of shooting or utilizing fancy camera skills.

“At the end I decided to focus more on filming realistically, using multiple cameras to portray the battle scenes from various perspectives, as if I was filming for a documentary.”

Actor Kwak Si-yang, who portrays the role of the first lieutenant Park Chan-nyun, also touched on the challenges of working on the film’s set.

“The cast couldn’t help but become close because it was physically very tiring to shoot the battle scenes on set,” the actor said. “We only had each other to encourage one another to get through the challenges.”

Behind-the-scene footage that was played during the press conference showed the actors filming scenes outside in the middle of the winter, even going into the sea to depict the actual battle scenes.

“I’m not sure if the audience will be able to feel the respect we felt for the 772 soldiers as we acted our respective roles for several months on set,” said Kim.

“But I sincerely hope that people can find a moment to cherish these forgotten heroes and the unmeasurable amount of sacrifice they willingly made while watching this film.”

The movie is slated to premiere in local theaters on Sept. 25.