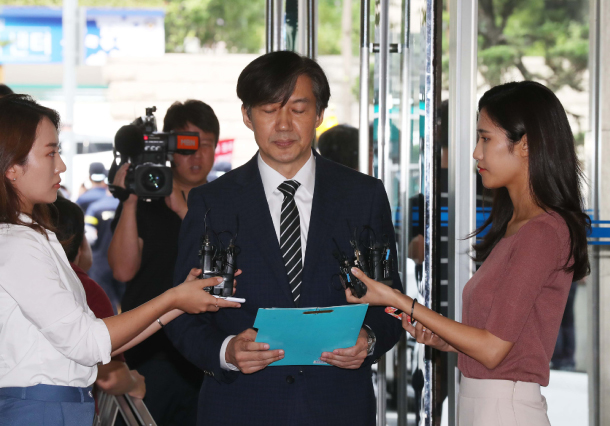 Justice minister nominee Cho Kuk, center, is peppered with questions from reporters on his way to work in Jongno District, central Seoul, on Wednesday. [KIM SANG-SEON]

Opposition politicians on Wednesday threatened a campaign to demand President Moon Jae-in’s resignation if he appoints Cho Kuk justice minister after a snowballing scandal centered on his daughter’s academic career.

“Cho’s life is about special treatment, unfair processes and corruption, but this administration nominated him as justice minister,” Rep. Na Kyung-won, floor leader of the Liberty Korea Party (LKP) said. “The more the Moon administration defends Cho,” he added, “the faster it will sink.”

She threw Moon’s own words back at him from his inaugural address: “My administration will promote equal opportunities,” Moon said after being sworn into office on May 10, 2017. “The process will be fair, and the result will be just.”

“President Moon is ultimately responsible for the current situation,” LKP Chairman Hwang Kyo-ahn said Wednesday at a party leadership meeting. “Cho was unfit to hold any public office, and Moon let him work as senior presidential secretary for civil affairs for over two years. Now he has named him the justice minister.”

Other senior LKP lawmakers piled onto the president with criticism. “We must boycott the confirmation hearing and conduct an independent counsel probe and a parliamentary investigation,” said Rep. Shin Sang-jin. “If Moon still appoints Cho, the LKP and the public will need to immediately start a campaign to demand Moon’s resignation.”

Rep. Jeong Kab-yoon, deputy speaker of the National Assembly, warned that the president and his administration will face resistance from the public if he pushes through with Cho’s appointment.

Another conservative heavyweight, Rep. Yoo Seong-min of the Bareunmirae Party, also condemned Moon. “Equality, fairness and justice all died,” he wrote in a Facebook post. Yoo, a one-time presidential candidate defeated by Moon, said he was naive to have ever believed Moon’s slogans. “But the suspicions surrounding Cho prove that Moon’s pledge of equality, fairness and justice were hateful hypocrisy,” he wrote.

“Moon must recant the nomination and make sure that Cho will be judged by the law,” Yoo wrote. “If the president pushes forward with the appointment, this administration will face powerful resistance by the people and fall.”

As a part of a cabinet reshuffle earlier this month, Moon nominated Cho, one of his closest associates, to head the Ministry of Justice. Cho, a former professor of law at Seoul National University, previously served as senior presidential secretary for civil affairs until July.

Opposition lawmakers and media began scrutiny into Cho and his family immediately after the nomination on Aug. 9. At first, the media reported about suspicious management of his family wealth and dubious investments in a private equity firm, but the scandal really started snowballing with reports on his daughter’s years in high school and college.

On Tuesday, it was reported that the 28-year-old daughter, currently attending the Pusan National University’s Graduate School of Medicine, was listed as the first author of an English-language paper published in the Korean Journal of Pathology in 2008, after a two-week high school internship at the Medical Science Research Institute of Dankook University’s College of Medicine.

The professor who oversaw the internship and the research paper was the father of Cho’s daughter’s high school friend.

On Tuesday night, a new - and similar - allegation surfaced. The daughter was listed as a co-author of a paper after a three-week internship at the Bioengineering Laboratory of Kongju National University in July 2009, when she was a high school junior. Two months later, the paper was presented at an international academic conference in Tokyo.

The professor in charge of that internship and the research paper was a university schoolmate of Cho’s wife.

Opposition lawmakers argued that the daughter was eventually guilty of admissions fraud because she had cited the two internships and academic papers as accomplishments in her application to Korea University, where she did her undergraduate studies starting in 2010.

The LKP said it will ask prosecutors to investigate the special treatment Cho’s daughter allegedly received in high school and college.

Korea University said admission records were kept up to five years, and it no longer has information on her admission. Professor Seo Tae-yeol, who was dean of admissions in 2010, told the JoongAng Ilbo that he could not accept an interview request due to a health problem.

The scandal touches on one of the most sensitive issues to the Korean public - children’s education. The political scandal that led to the impeachment and removal of Park Geun-hye, Moon’s predecessor, started with the suspected admission irregularities involving Chung Yoo-ra, daughter of Park’s friend Choi Soon-sil.

It was revealed that Chung, an equestrian, entered Ewha Womans University using her ties with the president. Samsung’s sponsorship of the equestrian athlete daughter of Park’s friend also implicated the company in the influence-peddling scandal.

Opposition lawmakers are already comparing Cho’s daughter to Chung, stretching accusations of unfair treatment and power privilege across ideological lines. “This case is 10 times more serious than Chung’s case,” said Rep. Kim Jin-tae of the LKP. “At least Chung was an Asian Games gold medalist. What was Cho’s daughter?”

The scandal around Cho’s daughter grew further Wednesday as revelations were made that her description on the two research papers in question was fudged. In Dankook University’s paper, she was identified as a member of the Institute of Medical Science. The paper from the Kongju National University identified her as a member of the university’s department of biology, the JoongAng Ilbo reported. In both cases, she was actually a high school intern.

The Korean Medical Association, the largest group of medical doctors in Korea, held a board meeting on Wednesday and decided to hold a disciplinary hearing to probe whether the Dankook University professor who listed Cho’s daughter as the first author on the research paper had committed ethics violations.

Of the 24 members on the board, 17 agreed that the professor must face a disciplinary hearing. The association accused him of infringing upon the dignity of a medical doctor and the honor of the association and the medical profession.

The professor is a pediatrician at Dankook University’s Medical School.

Choi said it was an unprecedented case. “This is a blasphemous act against medicine and science,” he said. “To write a medical science paper that requires a high level of professional expertise, you have to be qualified. You must accurately denote who wrote the paper. It is unacceptable that a medical illiterate, a high school student, who does not understand the paper’s contents, is named as the first author. It just disgraces the dignity of medicine.”

The Dankook University professor told the JoongAng Ilbo that he had struggled to figure out how to credit Cho’s daughter in the paper. “There was no regulation,” he said. “During the internship, she was a member of the institute, so I listed her as so. I judged that I did not have to cite her high school.”

“He needs to present an explanation,” Rep. Park Yong-jin of the DP told CBS Radio on Wednesday. “If the explanation is not convincing to the people, we have to prepare for the worst situation.”

Rep. Song Young-gil of the DP also said the suspicions are unacceptable to ordinary people.

The Justice Party, a minority progressive party and an ally of the DP, said Wednesday that it will send a list of inquiries to Cho today. “We are almost done with what we need to check with him,” a Justice Party official said.

Until now, most nominees seen as unfit by the Justice Party have stepped down.

As of Wednesday, Cho made clear he had no intention of giving up the nomination, and the Blue House defended him.

“It is fake news that my daughter committed admission fraud for university and graduate school,” Cho said Wednesday. “I humbly accept criticism of me as a minister nominee and my family.”

Cho will have to undergo a non-binding confirmation hearing at the National Assembly before a formal appointment, although the ruling and opposition parties failed to agree on a date. By law, the president doesn’t need endorsement from the legislature to appoint a minister.

The Blue House defended Cho, ignoring the opposition parties’ demand that Moon must withdraw the nomination. “Cho must be verified the same way as other minister nominees,” Yoon Do-han, senior secretary for public communication, said Wednesday.

“The media is scrutinizing the nominee, and accusations are continuing against Cho’s family,” Yoon said. “Some are reasonable, but some are exaggerated, false or highly speculative.”