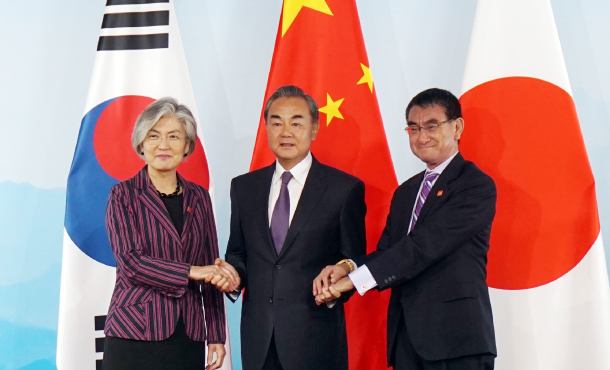 Korea, Japan and China will hold a trilateral summit at the end of this year in China amid deep diplomatic discord between Seoul and Tokyo, the three countries’ foreign ministers agreed Wednesday in Beijing.

Korean Foreign Minister Kang Kyung-wha and her Japanese counterpart, Taro Kono, met separately on the sidelines of the trilateral foreign ministers’ meeting but made no progress on their diplomatic-economic dispute, though they agreed to continue to hold talks.

Kang met with Kono for 35 minutes from 2 p.m., China Standard Time, and mainly discussed Japan’s new trade restrictions on Korea, the forced labor issue and Korean Peninsula affairs, according to Korean diplomats. Kono was said to have raised their bilateral military intelligence-sharing accord, the General Security of Military Information Agreement (Gsomia), though precisely what he said was not known. Kang was said to have replied that Seoul was “reviewing” its decision whether to extend the information sharing pact or not.

Kang’s meeting with Kono was the most important meeting in Beijing this week given the strained ties between the neighboring countries and the upcoming deadline for Gsomia.

Signed in November 2016, Gsomia is renewed automatically every year unless either of the two countries decides to scrap it. The country wishing to walk out must give at least 90 days’ notice, meaning the last opportunity to do so before the latest agreement expires is this Saturday.

Seoul has been toying with the possibility of withdrawing from the agreement in retaliation for Japan’s removal of Korea from a so-called white list of countries receiving preferential treatment in trade, saying a final decision would, in part, depend on Kang’s meeting with Kono Wednesday.

The Kang-Kono meeting also came shortly before Japan’s removal of Korea from its white list formally goes into effect next Wednesday.

Korean government officials told local media that Kang expressed “regret” to Kono for Tokyo’s plan to remove Korea from its white list and asked the Shinzo Abe administration to cancel the move. Kang also mentioned Japan’s alleged plans to dispose of contaminated water from its stricken Fukushima nuclear plant into the Pacific Ocean, saying Seoul hopes Tokyo makes the wise decision not to follow through.

On the forced labor issue, both sides were said to have repeated their respective stances, which would mean Kang said the Korean government can not interfere in Korean Supreme Court rulings that ordered Japanese companies to compensate Koreans forced to work for them during World War II, while Kono said all compensations were settled in a 1965 accord normalizing relations with Seoul, through which Japan provided Korea with an economic cooperation fund.

Before Kang’s bilateral meeting with Kono on Wednesday was a trilateral meeting that also included Chinese Foreign Minister Wang Yi. In a press conference following the three-way talks, Kang said the three countries agreed to join efforts to achieve the complete denuclearization of the Korean Peninsula and bring “permanent peace” on the basis that they share the responsibility of guaranteeing peace and stability in Northeast Asia.

The three nations also agreed on an economic cooperation system involving Korea, Japan, China and “a third country.” Wang said he hoped to build an East Asia cooperative system by accelerating talks for the signing of a Seoul-Beijing-Tokyo free trade agreement and the Regional Comprehensive Economic Partnership (RCEP), a proposed free trade agreement between 16 Asian countries including South Korea, Japan and China.

Wang vowed to cooperate with Korea and Japan to successfully host a trilateral summit at the year’s end.

BY LEE SUNG-EUN, YOU SANG-CHUL [lee.sungeun@joongang.co.kr]