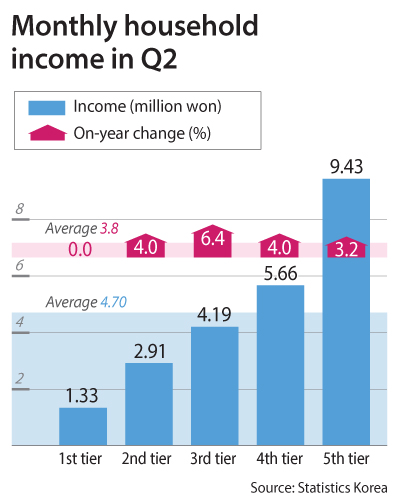 Korea’s income gap reached an all-time high in the second quarter after government efforts to increase wages ended up helping affluent households instead of the needy.

Statistics Korea reported Thursday that the gap between disposable incomes for the highest and lowest income brackets was the highest-ever for the quarter.

According to the agency’s data, monthly disposable income for the lowest earning bracket rose 1.9 percent in the second quarter from a year earlier to 865,700 won ($715). The same figure for the highest earning households rose 3.3 percent to 4.6 million won.

“Income for the top 20 percent rose due to increased earned incomes,” said Park Sang-young, a director at Statistics Korea, distinguishing between earned incomes for salaried employees and business incomes made by self-run businesses and mom-and-pop shops. “This has led to increased income disparity between the top and lowest households.”

The latest income data indicates that the government’s “income-led growth” policy, which tried to spur economic growth through direct increases in wages, has actually had an adverse impact on lower-earning households.

Under its policy, the government hiked the minimum wage steeply over the past two years. The minimum wage last year rose by 16.4 percent, the sharpest increase in nearly two decades, while this year, it went up 10.9 percent.

“The fall in earned income [in the lowest bracket] indicates that a lot of low-income jobs have disappeared due to the steep minimum wage hikes,” said Kim Tai-gi, a professor of economics at Dankook University. “The rise in the minimum wage instead had a greater influence on higher-earning workers as it is an important standard in wage negotiations.”