Do female rappers need to go pop to succeed?: Women in hip-hop face sexual harassment and fans who question their abilities

Do female rappers need to go pop to succeed?: Women in hip-hop face sexual harassment and fans who question their abilities 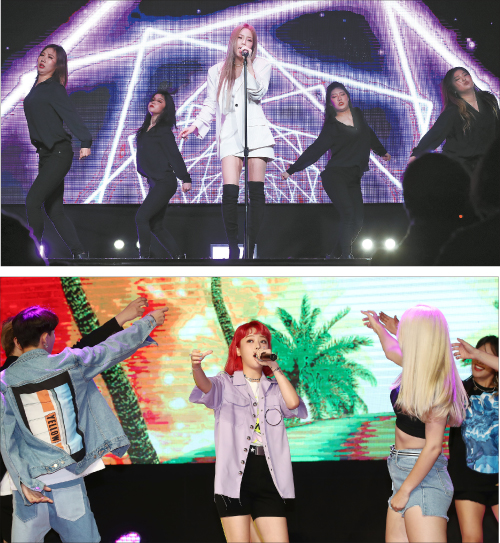 Top: Heize, who appeared on the second season of hip-hop competition “Unpretty Rapstar” in 2015, is now one of Korea’s most in-demand solo female singers. Above: Rapper Kisum showed off a colorful performance at her EP showcase. [YONHAP]

Rapper Kisum made a colorful return on Tuesday with her new EP “yeah!sool,” her first album release in over two years.

Kisum showed off a brand new style that stood in contrast to her earlier hits “2 BEER” (2016) and “Sleep tight” (2017), which featured contemplative lyrics and moody tones.

In fact, when Kisum performed her new EP’s lead track “Sooriya” during an album showcase for press on Tuesday, she caught audiences off guard by pulling off K-pop-style choreography to the song’s catchy and upbeat melody. Her cute and bubbly image during the showcase was a far contrast from how she appeared during the first season of the all-female hip-hop competition program “Unpretty Rapstar” in 2015, when the rapper battled her way through the show against other female artists.

Kisum isn’t the only female rapper who’s gone through a transformation since graduating from “Unpretty Rapstar.”

Heize, who participated in the second season of the show, is now one of Korea’s most in-demand solo female singers. Although her first few albums featured her rapping, the singer has become better known for her soulful ballads and tender voice, and she has evolved into one of the most highly sought-after artists to appear on television drama soundtracks.

“I think [Heize has] showed R&B and ballad tendencies from the beginning,” said music critic Mimyo. “Kisum too - she approached rap casually from [the beginning], so her new concept doesn’t come as a surprise. Given the small market for female rappers, I think singers don’t feel the need to only pursue rap when they can make other music just as well.”

In Korea, there are very few female artists who only make rap music. Even Yoonmirae, who’s affectionately referred to as “the queen of hip-hop” by her loyal fans, has seen songs that she has sung, like “Touch Love” (2013), chart higher than her rap releases in recent years. 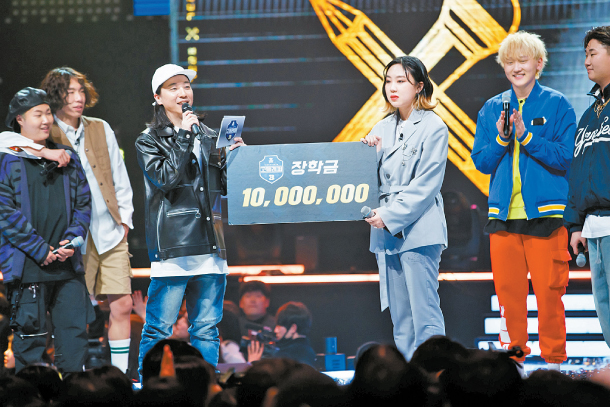 “High School Rapper 3” winner Lee Young-ji became the first female contestant to win a local hip-hop audition program featuring both male and female contestants but faced hateful comments from viewers who believed she won solely because of her gender. [MNET]

The local hip-hop scene is overwhelmingly male-dominated. Looking at this Thursday’s rap/hip-hop chart on Melon, Korea’s biggest music streaming service, for example, only one female rapper - Blackpink’s Jennie - made it to the top 50 tracks. The gender imbalance is apparent in Korea’s numerous television hip-hop audition programs as well. From “High School Rapper” to “Show Me the Money” and even “Unpretty Rapstar,” the judges and mentors are either entirely or overwhelmingly male.

“It’s true that there are few female rappers, but in general there’s a lack of talent,” mused music critic and chief editor of hip hop magazine Rhythmer Kang Il-kwon.

“Rap developed from a very specific socio-racial background, and rappers need to know and understand that context to do well. That’s not to say that there aren’t bad male rappers, but the reason why they are doing better is because they had a head start in the scene.”

Others note that the current structure of the underground hip-hop scene is largely to blame.

“Rappers need to build their career from the underground, but it’s said that women face tremendous stress in the field compared to men,” said Mimyo. “They’re sexually harassed on a regular basis, and if they enjoy just a bit of success, people assume that they got where they are by being close to certain men.”

Despite being one of the judges’ favorites and consistently performing well throughout the stages, however, Lee couldn’t escape controversy with her historic win. After the final episode aired, some viewers went online to complain that Lee had only won because she was female and that women voters had indiscriminately voted for her because of her gender. Some haters went so far as to circulate a version of a song that Lee recorded with two male singers that had Lee’s part removed.

In 2017, a provocative track by rapper Black Nut fueled public debate on misogyny in hip-hop. In “Too Real,” the rapper sexually insulted and degraded female rapper KittiB, who ended up taking legal action against the artist. Black Nut received a six months prison sentence and two years of probation. His first appeal maintained the court’s decision, but he has applied for a second appeal as he maintains that “dissing” is a common practice in hip-hop.

The only way for female rappers to be able to make a greater impact is for diverse and talented individuals like Lee to continue coming forward, critics believe.

“Looking at her performance on ‘High School Rapper,’ she’s one of few female rappers that I have high expectations for,” said Kang.

“I think female rappers like Yoonmirae, Cheetah and Jessi could do well because their image fell within the limits that fans could accept of female rappers,” added Mimyo. “Talented artists like Lee will push the boundaries of the type of female rappers that are accepted by the mass public.”