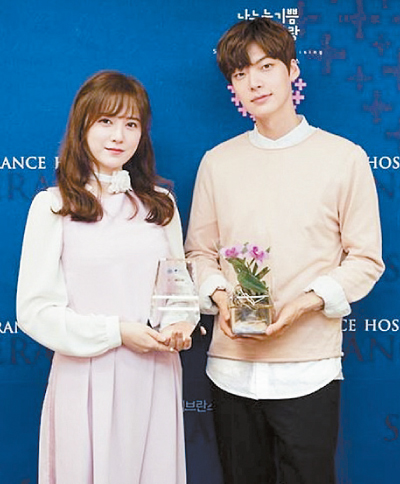 It looks like the divorce won’t come easy for actor couple Koo Hye-sun and Ahn Jae-hyeon.

Following Koo’s revelation about the couple’s imminent divorce that came over the weekend, Ahn posted his side of the story for the first time on Wednesday night after keeping silent amid growing rumors.

“The past three years of our marriage had its happy moments, but it was a mentally overbearing time for me,” wrote Ahn.

“We tried to make it work, but it wasn’t easy trying to bridge the gap between us. We failed to come to an agreement and decided to live apart […] After talking it over, Koo Hye-sun and myself have decided to get a divorce on July 30.”

Ahn denied having “kept in touch with various women while drunk,” as previously claimed by Koo, saying, “I tried my best as a husband to keep my marriage, and I had never done anything shameful.”

“I have been receiving psychiatric treatment and began taking anti-depression medication a year and four months into our marriage,” Ahn wrote.

“I introduced my husband to the psychiatrist I had been visiting when I was hit with depression after our dog died,” wrote Koo.

According to Koo, Ahn had called other women when he was drunk in front of her eyes and even left her on his birthday to drink with other people even though she had prepared a meal for him.

“He repeatedly asked for a divorce. When I asked him, ‘What did I do wrong?’ He would tell me that I wasn’t sexy, that I didn’t have sexy nipples,” wrote Koo.

“I was a ghost living in the house. The woman you had once loved so much became a zombie, even now.”

While fans of both stars are leaving supportive comments on social media, some are lamenting over how the two continue to expose parts of their married life, saying, “Please just go to court or call each other.”

According to a report by local news outlet Sports Chosun, Ahn is preparing to reveal all of his text messages with Koo after consulting his legal attorney this week.