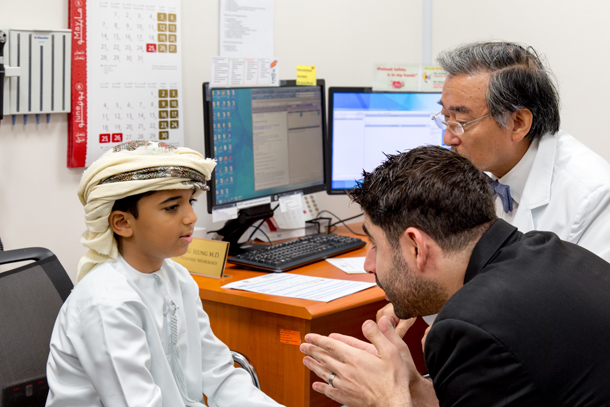 A neurologist, right, treats a child at the Sheikh Khalifa Specialty Hospital (SKSH) in the UAE. [SEOUL NATIONAL UNIVERSITY HOSPITAL ]

SHIN SUNG-SIK
The author is an editorial writer at the JoongAng Ilbo.

Earlier this month, I visited the Sheikh Khalifa Specialty Hospital (SKSH) in the United Arab Emirates (UAE). It has been run by the Seoul National University (SNU) Hospital for the last five years, the first export of a university hospital. I was referred to a local employee named Fatima. She worked at a Emirati government hospital for 10 years and came here in 2014. She said she was thankful that she could work at the hospital with Koreans.

I asked why she was thankful and she responded, “The university sent the best medical and management staff and provides medical service successfully.” She said she had worked with British and Egyptian staff and was worried about working with Koreans at first, but she was proud now. “They have great teamwork, the best competency and a big heart dealing with patients.”

The hospital is in the middle of the desert and patients drive one to two hours to get treatment. Celebrating its fifth anniversary, SKSH presented plaques of appreciation to local residents and the police chief. The cafeteria offers a local, Indian and Korean menu. The VIP rooms have cranes to help with bigger patients. It is a detailed localization tactic. As the UAE has relatively weak medical infrastructure and gets help from other countries, it is the battleground of global competition. Here, Korean medicine has been verified as the world’s best.

After the first five-year contract, the SNU hospital was selected for a second five-year term. Over 10 years, it will produce 10 trillion won ($8.28 billion) in profit. Earlier last year, the UAE asked the SNU hospital to prepare for multiple bids. The hospital protested, but the atmosphere changed. SNU Hospital President Kim Yon-su said that after President Moon Jae-in’s UAE visit in March 2018, it changed to a single bid. At the first bidding in 2014, SNU competed against major hospitals from seven to eight countries, including Germany.

SKSH head Sung Myung-whun said that Korea’s reputation in construction in the Middle East was hugely bolstered by the UAE nuclear power plant contract in 2009 during the Lee Myung-bak administration. It was a chance to publicize Korea in the Middle East. The success of the SKSH did not come overnight. The foundation was the blood, sweat and tears of the construction workers and skills and technologies of the Korean medical industry supported by the oil dollars and Moon’s business diplomacy.