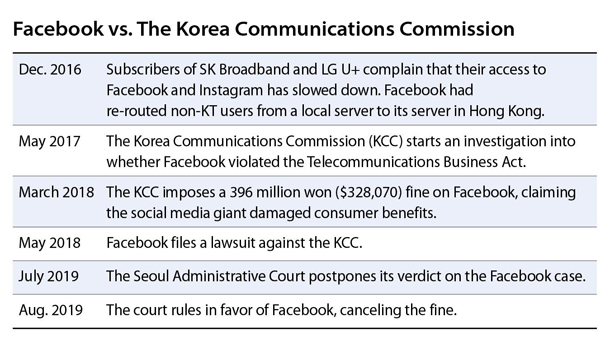 The Seoul Administrative Court on Thursday ruled in favor of Facebook, canceling a fine imposed on the social media giant by the Korea Communications Commission (KCC).

The KCC, Korea’s telecommunications industry regulator, said it will appeal the decision.

Thursday’s ruling was the latest twist in a fight with Facebook that has been going on since 2016, when the Ministry of Science and ICT changed Korea’s network-sharing regulations, causing conflicts between local internet service providers and the social network.

Facebook had been paying KT for access to a cache server, which is used to save internet content locally in temporary storage so that the speed of access to data is improved. At the time, SK Broadband and LG U+ subscribers were automatically diverted to KT’s cache server.

The law change, however, meant that it was more expensive for KT to allow subscribers to the other two networks access to its cache network. KT asked Facebook to pay more due to the increased costs.

Rather than paying the increased costs, Facebook instead re-routed non-KT users to its servers in Hong Kong and the United States without notifying subscribers, causing a noticeable drop in Facebook connection speeds for those users.

While Facebook claimed it was unintentional and it did not expect the re-routing to result in severe service quality degradation, the KCC slapped a 396 million won ($328,070) fine on Facebook Ireland Limited, which controls the company’s Korean operations, arguing it damaged consumer benefits without a justifiable cause.

At the time there was speculation that Facebook deliberately diverted non-KT users to gain an upper hand in network fee negotiations with SK Broadband and LG U+.

The court, however, said that though the re-routing caused inconvenience, Facebook did not intentionally limit consumer access to its platform to hurt customer benefits.

“There is no reason for us to intentionally cause inconvenience to our customers,” said Steve Park, director of policy at Facebook Korea, during a press briefing with reporters last week. “[A] core part of Facebook’s service is user experience and satisfaction.”

“Global content providers may use the ruling against us to pay less network fees,” a source from a mobile carrier said.

Currently, KT and LG U+ are negotiating fees with Facebook while SK Broadband completed negotiations in January. SK Broadband is operating a separate cache server to handle Facebook traffic based on the deal inked earlier this year.

Even for SK Broadband, though, negotiations are still ongoing with other content providers like Google and Netflix. Those companies are known to be paying very little or even nothing to local mobile carriers for the use of their networks.

As Naver currently pays 70 billion won per year and Kakao pays 30 billion won, the ruling could also spur more controversy on the unfair treatment of Korean firms compared to their foreign competitors.

Internet service providers and the KCC are hoping to separate the ruling from network usage fee negotiations. The KCC said in a statement that this ruling was about “whether Facebook’s re-routing damaged user benefits, not about global IT companies paying network usage fees.”

Facebook Korea released a statement Thursday reading, “we welcome the decision by the Seoul Administrative Court. We will continue to put in efforts to protect Korean consumers.”