The Korando, first minted in 1983, is near legendary. It has come to symbolize the SUV in Korea and has become an iconic symbol in the local auto market.

It has also helped to keep SsangYong Motor afloat. Despite years of challenges and a number of owners, the company has been helped through it all by the steadily selling Korando.

Thirty six years after the first release, SsangYong is again betting big on its lifelong partner. It is hoping the Korando will help it improve its standing in the Korean auto market and again capture the hearts of local consumers.

By introducing a gasoline version to the Korean market, SsangYong is seeking to appeal to three-member households looking to buy their first SUVs and to boost its sales numbers. According to Statistics Korea, 78 percent of Korean households had three or fewer members last year.

To be honest, my sights were set low. SsangYong Motor’s poor results recently suggest the company is not good at making good cars. 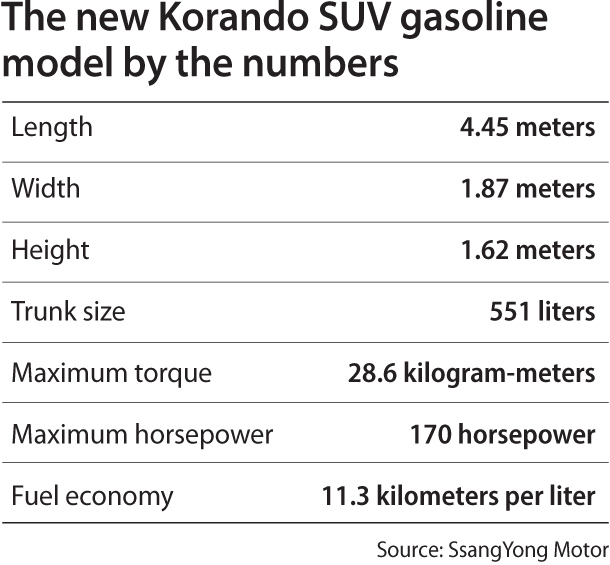 But the mighty Korando proved me wrong during my 53-kilometer (33-mile) test drive of the gasoline model of the Korando SUV from Yeouido, western Seoul, to Incheon on Tuesday.

A high level of workmanship was apparent in the new Korando, with the gasoline model punching well above its weight in terms of convenience and safety features.

The gasoline model of the Korando SUV is priced between 22.6 million ($18,700) won and 29.4 million won depending on the trims and options chosen.

While SsangYong said the new Korando SUV is made to target three-member households, the muscular exterior suggests a more masculine market.

The four-door gasoline model is rather large for an SUV, and the bold horizontal lines across the frontal headlamps are sharp and distinctive. The Korando is no Tivoli, its smaller-sized sister SUV.

Korando is marketed as a mid-size SUV, but it didn’t feel like one once I stepped in for a ride. The vehicle is 4.45 meters long (14.6 feet), 1.87 meters wide and 1.62 meters tall, but the interior felt much more spacious than the exterior would suggest.

I could drive the Korando like I’d drive a large-sized pickup truck.

The comfortable leather seats and modern-style dashboard seemed to work well with SsangYong’s focus on selling the Korando SUV to small-sized families. The air-conditioning and ventilation system installed inside the seats prevented me from sweating on that hot summer day.

The large 551-liter (19.5-cubic-feet) trunk would be appealing for families, even those with more than three members, as it has more than enough space to comfortably fit two strollers.

The gasoline SUV was satisfactory on the road as well. With its 1.5-liter turbo gasoline engine, the Korando achieves up to 28.6 kilogram-meters (207 pound-feet) in torque and 170 horsepower.

The car smoothly made turns and changed lanes even while speeding above 100 kilometers per hour (62 miles per hour) ? impressive, considering that the car weighs around 1,500 kilograms (3307 pounds).

While SsangYong started out as a domestically owned automaker, it now is a Korean subsidiary of India’s Mahindra & Mahindra. For that reason, some people might think that the new Korando has the same sort of sub-stellar infotainment systems often found in foreign cars.

That wasn’t the case at all. The blaze cockpit system was highly responsive and convenient for me while driving the new Korando for the first time.

With a few clicks, I could change what was on the screen, whether that was a full map of my driving course, a mirrored display of the main infotainment system display or directions and speed levels.

The 9-inch display in the center front was much the same. The navigation was never slow in following the car’s route on the road, and searching through the main menu was a joy rather than a frustration, as is common when driving foreign cars.

Yet it was disappointing to discover that the new Korando’s safety features were a little behind those of competing models.

SsangYong advertises that drivers can “drive less,” as the new Korando SUV has an intelligent adaptive cruise control system that enables the car to stay in lane and speed up automatically when other cars move.

While the Korando SUV did make some moves during the test drive, at times, the vehicle failed to recognize the lanes and sometimes advised me of vehicles in front that were not even there.

I advise Korando buyers to keep their hands on the steering wheel, as the age of autonomous driving has not arrived yet.

The gasoline model of the new Korando SUV seems to be a promising option for SUV lovers and small-sized families to consider, as the mid-sized SUV comes with a competitive price level, enough space for everyone and stable performance on the road. But remember, the new Korando is not a Tesla, as its claim of autonomous driving is just that.

Keep your hands on the wheel and your eyes on the road.