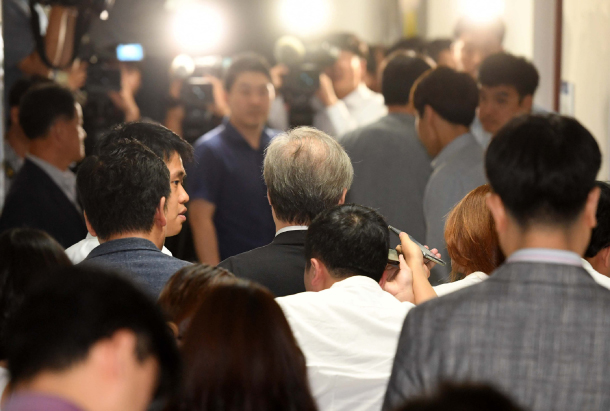 Kang Nae-won, head of Dankook University’s academic affairs, center, walks into a conference room on Thursday at the university’s Jukjeon Campus in Yongin, Gyeonggi, to attend a meeting of the school’s ethics committee. [NEWS1]

Dankook University said Thursday it would launch an internal investigation into allegations that justice minister nominee Cho Kuk’s daughter was wrongly cited as an author of a medical research paper in 2008 and used that accomplishment to gain admission to Korea University in 2010.

The move was Dankook’s boldest since the allegations were reported by a local news outlet Monday, although the effect on Cho’s nomination may be minimal. By law, the National Assembly has until the end of this month to hold a non-binding confirmation hearing on Cho, but Dankook sources say any conclusion on Cho’s daughter could take several weeks to months to reach.

Cho’s 28-year-old daughter, who currently attends Pusan National University’s Graduate School of Medicine, was listed as the first author of an English-language paper published in the Korean Journal of Pathology in 2008. Cho’s daughter was a high school student at the time and had finished a two-week internship at the Medical Science Research Institute of Dankook University’s College of Medicine. The professor who oversaw the internship and the research paper was the father of Cho’s daughter’s high school friend.

An ethics committee at Dankook led by Kang Nae-won, the university’s head of academic affairs, held its first meeting on the issue Thursday morning and reached a decision to launch a “preliminary investigation” within this month, followed by a subcommittee probing allegations surrounding the justice nominee’s daughter.

Kang told reporters after the closed-door ethics committee meeting that Dankook was determined to review “every suspicion” raised by the local media about Cho’s daughter, adding that a preliminary investigation was needed before a formal probe because the allegations were so “broad” and required “a lot of basic data” to refer to.

If the subcommittee concludes Cho’s daughter was given undeserved credit, the group can ask the school’s personnel committee to penalize any faculty members responsible for that transgression and request the Korean Journal of Pathology to delist the paper. In that case, Korea University, which granted admission to Cho’s daughter in 2010, could launch an investigation of its own to verify whether the paper was a big factor in her admission to the school’s College of Life Sciences & Biotechnology.

Korea University earlier raised the possibility of canceling the daughter’s admission retroactively if they discover any flaws in her admission.

According to Dankook University’s ethics rules, the school has up to 30 days for a preliminary investigation when an ethical case occurs on the school campus, and a formal investigation based on that earlier probe has up to 90 days to reach a conclusion.

Chances are high that Cho’s daughter will be summoned to answer questions about her involvement in the research, but Dankook officials refused to say for sure.

The investigation will likely focus on whether the Dankook professor violated the school’s research ethics code by offering authorship to a person who did not contribute to the study, which school officials say is as grave an infraction as plagiarism.

The Korean Academy of Medical Sciences, on its part, said in a statement Thursday that it was “suspicious” about whether Dankook University followed research authorship standards in putting Cho’s daughter’s name on the paper, stressing that the professor who oversaw the research must clarify how he decided on the order of the names. A total of six authors were cited for the paper.

Exactly when the younger Cho began her two-week internship at Dankuk’s Medical Science Research Institute remains unclear as well. Some local media outlets raised suspicions this week that she joined the research team only after the research was substantially finished and only helped with writing the paper in English.

The Korean Academy of Medical Sciences urged Dankook and the paper’s five other authors to clarify the allegations. The academy also pointed out it was unusual that Cho’s daughter was described as being a member of Dankook’s Medical Science Research Institute without mentioning that she was also a student at Hanyoung Foreign Language High School.

Students at Korea University, where Cho’s daughter earned her bachelor’s degree, are planning to hold a rally today at 6 p.m. on the school campus in Seongbuk District, central Seoul, to demand the school get to the bottom of her admission nine years ago.

Students at Seoul National University, where Cho Kuk serves as a professor, will hold a separate rally at their campus in Gwanak District, southern Seoul, today from 8:30 p.m. to demand Cho voluntarily abandon his nomination as justice minister and permanently leave the school.

With controversy about Cho and his family continuing to rage in advance of his confirmation hearing, the ruling Democratic Party relayed plans Thursday to establish a task force solely dedicated to defending Cho in the local media. It will be composed of the party’s spokespeople and members of the party’s parliamentary Legislation and Judiciary Committee, which will host the confirmation hearing.

Cho has repeatedly refused to abandon his justice minister nomination and said Thursday morning as he entered his office in central Seoul that he’d live with “more humility” from now on. Cho added that “as the head of the household and as a father of a child,” he should have cared more deeply about his domestic matters.