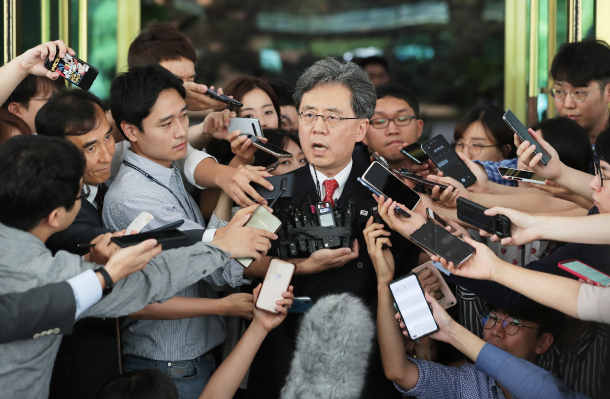 South Korean Deputy National Security Adviser Kim Hyun-chong said Thursday that he got the “impression” from his talks with the top U.S. envoy on North Korea that nuclear talks between Washington and Pyongyang may resume soon.

Kim met U.S. Special Representative Stephen Biegun hours after the North said it has no interest in dialogue as long as the allies keep up military threats against it in an angry reaction to the delivery this week of more F-35A stealth fighters to the South. “The impression that I got (from the talks with Biegun) was that the dialogue between the North and the U.S. appears likely to unfold soon,” Kim told reporters after the hour-long meeting.

On Wednesday, Biegun said the United States is ready to resume working-level talks with the North “as soon as we hear from our counterparts,” in a renewed call for the regime to resume dialogue.

Washington and Pyongyang were expected to restart working-level talks last month based on an agreement between U.S. President Donald Trump and North Korean leader Kim Jong-un during their impromptu talks at the inter-Korean border on June 30.

But the talks have not been held amid Pyongyang’s furious reactions to the combined South Korea-U.S. military exercise, which it berated as a rehearsal for invasion and a sign of continued hostility.

Kim also said that Biegun took note of Seoul’s “restraint” over Pyongyang’s recent sharp rhetoric. The North has been sharpening its criticism of the South over the joint exercise with Washington and the introduction of high-tech weapons systems from the United States. “The U.S. highly regarded this restraint to achieve the constructive goal,” he said.

Apparently mindful of concerns that the North has been shunning dialogue with the South while remaining open to talks with the United States, Kim stressed that the allies have been closely cooperating over the nuclear negotiation process.

“As there is trust between Representative Biegun and his (South Korean) counterpart Lee Do-hoon, and they have been sharing everything, things will go well,” he said.