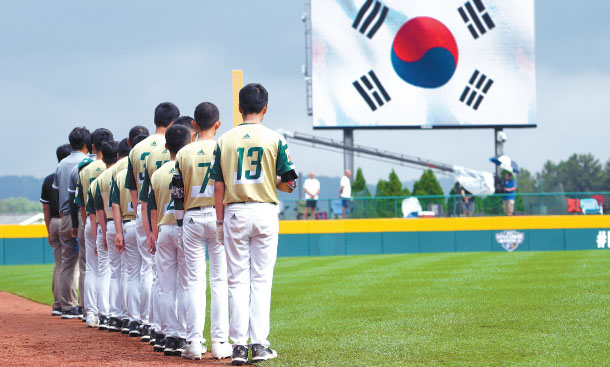 Chung Nam (B) Little League stand for the Korean national anthem before their game against Pabao Little League at Howard J. Lamade Stadium in South Williamsport, Pa., on Aug. 22. The South Chungcheong team, representing the Asia-Pacific region, lost the game 5-3 to narrowly miss out on a spot in the 2019 Little League Baseball World Series International Final. [LITTLE LEAGUE BASEBALL AND SOFTBALL]

For most athletes, the opportunity to represent their country is the greatest possible honor. Thirteen boys from South Chungcheong took that one step further this week, representing the best part of an entire continent at the 2019 Little League Baseball World Series.

Chung Nam (B) Little League, a team of 10- to 12-year-olds that went from representing South Chungcheong to representing Korea and ultimately the entire Asia-Pacific region, came within striking distance of the 2019 Little League Baseball World Series International Final, falling just short of the mark with a 5-3 loss against the Caribbean — represented by Pabao Little League from Willemstad, Curacao — in the final elimination game on Thursday at Howard J. Lamade Stadium in South Williamsport, Pa.

Chung Nam, the first Korean team from outside Seoul to ever play at the World Series, ended their championship campaign with two wins and two losses, starting the tournament strong before gradually falling behind in the final two games.

The Asia-Pacific side started with a 10-3 win over Latin America representatives Cacique Mara Little League from Maracaibo, Venezuela on Aug. 16.

After taking a 1-0 lead in the first inning, Chung Nam slipped behind 2-1 in the second before racking up a massive three runs per inning in the third, fourth and fifth. Pitcher Na Jin-won started his tournament off with a bang in the batting box, knocking in five runs batted in (RBI) with one home run in the first game of the series. 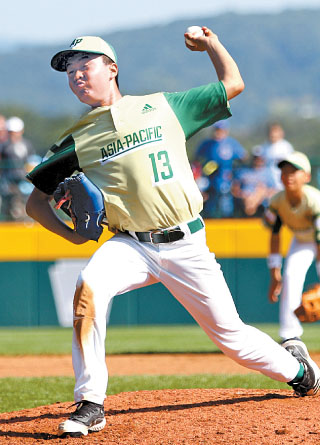 Na Jin-won dominated both at bat and pitching, ending the World Series with a .333 batting average and 3.724 ERA. [LITTLE LEAGUE BASEBALL AND SOFTBALL]

The team continued its momentum in game two, beating the Caribbean — the same side that would eventually go on to knock them out of the tournament — 4-0 on Aug. 18. Na and Yang Su-ho split the game on the mound, pitching three innings and picking up six strikeouts each. Catcher Hyun Been and shortstop Park Min-wook both picked up RBIs for the second game in a row.

Things went awry for Chung Nam in their third game, against Japanese side Chofu Little League from Chofu City on Aug. 21. Although geographically part of the Asia-Pacific region, in Little League, Japan competes in its own category.

Chung Nam scored first, with a home run from Na, giving the Asia-Pacific side an early lead at the top of the first inning. Chofu immediately came back, scoring two at the bottom of the first to take the lead, but a home run from Jung Gi-beom in the second took the score to 2-2. Chofu found its feet again at the bottom of the third, pulling ahead to immediately earn a spot in the international final.

The Japanese side has had a dominant tournament, trouncing Europe-Africa team Emilia Romagna Little League from Bologna, Italy, 20-0 in its first game before beating Epitacio “Mala” Torres Little League from Guadalupe, Mexico, 5-0.

Chung Nam went on to face Pabao for a second time, losing 5-3 after a huge first inning saw the Caribbean side take a 4-1 lead in the first inning. For the first time in the tournament, Na’s bat stayed silent on Thursday, with Yang and Park picking up the team’s three runs.

Pabao will now go on to face Chofu in the international final tonight, before the winner of that game and the winner of the U.S. final face each other in the World Series Final tomorrow.

A total of 16 teams compete in the World Series, eight from the United States and eight representing the rest of the world. Each team earns their spot by winning a series of qualifiers, ending with the regional qualifiers that feed into the World Series.

The international regions are: Asia-Pacific, Australia, Canada, Caribbean, Europe-Asia, Japan, Latin America and Mexico. The eight teams representing those regions face each other in the international bracket at the World Series. Unlike most major international sporting events, the Little League World Series is played in a double-elimination format, meaning that the winner of each game advances and the loser gets a second chance to stay in the tournament. Games are played over six innings.

Chung Nam’s Little League World Series campaign may have ended earlier than intended, but the players can return to Korea with their heads held high. Over the course of the Little League Baseball Asia-Pacific Regionals in June and the World Series, the Korean side won nine out of 11 games, tearing through the regional championship with seven straight wins including four double-digit scores.

Korean sides have competed at seven Little League World Series, winning the title three times. A Seoul side won the tournament in 1984, Korea’s debut year, 1985 and 2014. The 2016 East Seoul team and last year’s South Seoul team both won the international final to make it to the World Series Final but weren’t able to pick up the final win. A West Seoul team also competed in 2017.

Although Little League baseball is generally only covered in Korea when a local team does exceptionally well at the World Series, in the United States it remains a hugely popular sport. World Series games are often played to packed stadiums, with tickets to the final allocated in a random draw due to the high demand. Games are also broadcast on ESPN.