Naver is the most preferred employer for young job seekers. The IT firm topped the list for the second year straight, according to job search website Job Korea and Albamon, its website for part-time jobs.

Although Samsung Electronics was by far the most popular company for job seekers with backgrounds in science and engineering, Naver was the most preferred company overall. 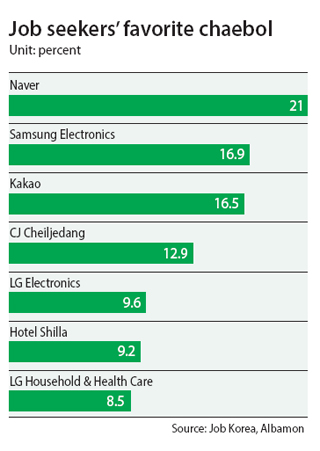 The survey of 1,244 university students studying at four-year colleges was conducted from Aug. 19 through Aug. 21. The top 100 companies in terms of market capitalization were listed as options in the survey.

Naver received 21.0 percent of the votes. It was followed by Samsung Electronics, at 16.9 percent, while Kakao was a close third, at 16.5 percent. CJ Cheiljedang, LG Electronics, Hotel Shilla and LG Household & Health Care followed in that order.

The primary reasons for the popularity of the Seongnam, Gyeonggi Province?based company were expectations about company benefits, salary and being able to do the work they want.

By majors, 21.9 percent of the science and engineering students picked Samsung Electronics as their top choice, followed by Naver, at 16.9 percent, and SK Hynix, at 14.3 percent.

Naver was the top choice for those studying business or economics, at 20.7 percent. Samsung Electronics came in second, at 17.3 percent, and CJ Cheiljedang third, at 14.5 percent.

While 67.6 percent said they chose a specific firm because of its benefits and the working environment, 45.5 percent said their choice was related to salary, while 36.4 percent of the respondents made their choice because they felt they could do the work they wanted at the company.