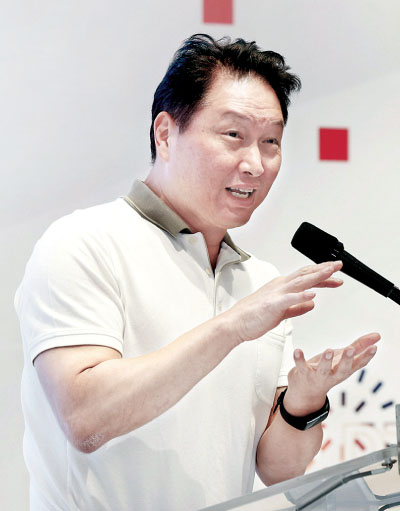 SK Group will focus on using digital technologies, like artificial intelligence (AI), to drive deep changes in its business, said the group in a statement following its annual Icheon Forum ending Thursday.

“We cannot guarantee the future of SK if we do not make use of innovative technologies that minimize transaction costs and help us deliver value to our customers in an effective manner,” SK Group Chairman Chey Tae-won said Thursday during his closing speech at the four-day forum held for group executives to discuss and learn about current affairs, business and the latest technologies.

The group recently announced its plans to integrate human resources training organizations that had been scattered around the group and establish an SK University in January next year.

Chey said the move will help the group nurture talent in the latest digital technologies.

He introduced the idea of combining energy and chemical businesses with telecommunications technology as example business model for the future.

“Energy suppliers will no longer be able to survive by just serving as suppliers,” he said, adding SK will focus on creating business models that can solve environmental problems while supplying energy.

Jeremy Rifkin, a U.S. economics and social theorist and writer, gave a lecture during the Icheon Forum via video link.

He was quoted by the group as saying SK’s way of pursuing a new energy business model is very timely and important for the sustainable growth of the human race.

Rifkin also emphasized that humans need to revolutionize energy systems from the ground up to create a zero-carbon society, according to the SK statement.