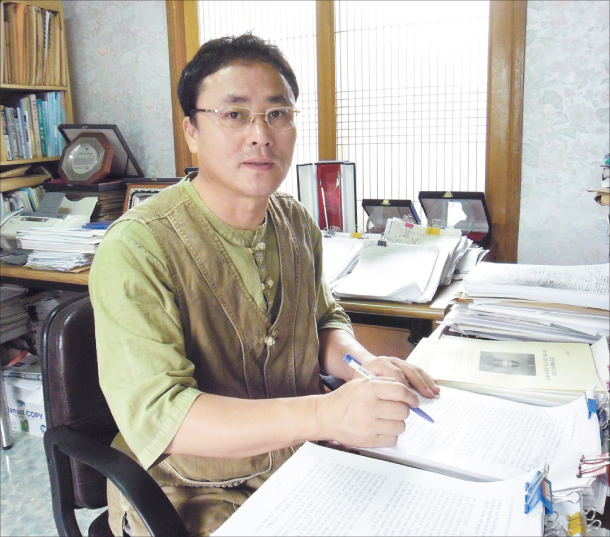 Koreans grow up hearing the names of independence activists like Yu Gwan-sun and An Jung-geun, but there are at least 1,000 other fighters, according to a man who single-handedly uncovered their records.

“The work takes time, as the records that I have to go through are often in traditional Korean characters and sometimes in Japanese, too,” said Jung Jae-sang, head of the Gyeongnam Independence Movement Research Institute in South Gyeongsang.

Since the 1990s, Jung has uncovered records on over 1,000 individuals who participated in independence movements around the period of the Japanese annexation of Korea from 1910 to 1945.

One of them is a man named Park Mae-ji, who was a 27-year-old leader of a local civilian militia which staged guerilla warfare against the Japanese military near Mount Jiri in South Gyeongsang in 1909. Records say he led a 400-person civilian army and was known for his accurate shooting skills.

He died in a battle with the Japanese army in Jinju, South Gyeongsang, on July 22, 1909.

History had forgotten Park Mae-ji, but after being uncovered by Jung, the government awarded the young freedom fighter with a Patriotic Medal of the Order of Merit for National Foundation in 2003.

Park is one out of 200 whose history was uncovered by Jung and then received recognition by the government as an independence fighter. Others include Hong Soon-nam, a woman who led a version of the March 1 Independence Movement among students in Gwangju in 1919, and Gang Dae-yong, Yeo Guk-yeop and Yeo Tae-won who together led an independence movement in Hadong County, South Gyeongsang, in 1927.

Jung said the research began out of curiosity.

He was hired as a journalist at the Hadong Daily, a now-defunct local paper in South Gyeongsang, in 1993. One day in 1993 he thought about looking into independence fighters from the region to write a feature story for the upcoming Aug. 15 Liberation Day but gave up after not finding the right expert to help him.

The paper closed doors due to lack of finance in 1994.

It was then that Jung said the work to uncover the records on independence fighters began in earnest.

Jung said he started with the names of individuals found in records uncovered by a local historian, Yeo Jae-kyu. These records would have a one- to two-sentence description on each individual that said where the person was born and how they died, which was usually while fighting the Japanese imperial forces.

Jung would then use these details to uncover more information in archives of local newspapers and district offices, as well as at the National Archives of Korea, which provided local court decisions and police reports.

Jung received a Civil Merit Medal from the government in June. He is working on publishing his findings in a book.