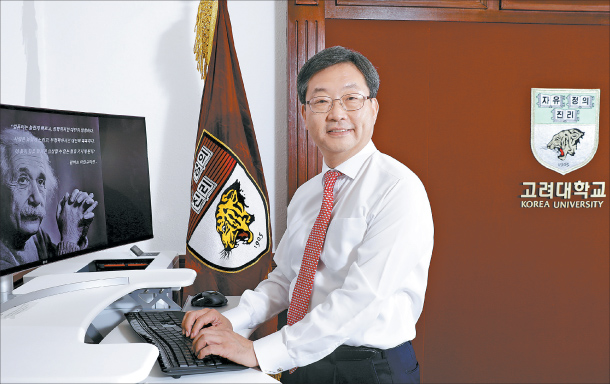 Korea University President Chung Jin-taek poses while being interviewed by the JoongAng Ilbo at his office at the university in central Seoul on Aug. 7. [KIM KYUNG-BIN]

It was evident upon walking into the office of the president of Korea University that he was a graduate of an engineering and technology school.

On the monitor propped up on a standing desk was a black and white screen saver of Albert Einstein and a quote often attributed to him.
“The computer is incredibly fast, accurate and stupid,” it read. “Man is incredibly slow, inaccurate, and brilliant. The marriage of the two is a force beyond calculation.”

“The Eniac [Electronic Numerical Integrator and Computer] was created in 1946,” said Chung Jin-taek, the first president of Korea University to have a background in engineering. “Since the invention, the world of computers has opened up another world of artificial intelligence [AI], and that is changing civilizations.”

Chung began teaching at Korea University from 1993. He was inaugurated as the president of the university on Feb. 28 this year.

“Some of us fear this incoming era of artificial intelligence, but we have to remember that it was humans who created AI,” he said. “Just like the quote here, humans are smart and intelligent, and computers are fast and accurate. When the two come together in the world of AI, it will still be humans at the center of that world.”

Korea University is among the three universities selected by the government earlier this year to be funded for the establishment of graduate schools on AI.

The JoongAng Ilbo sat down with Chung on Aug. 7 to discuss his visions for the university, especially on its new masters and doctorate programs on AI that are commencing this fall semester.

There are movements worldwide to train people to be AI experts, with some projections that say the world is in need of 700,000 experts in AI in the near future, leading to movements across universities in the United States, Britain, China and other countries to set up AI schools and invest in AI research. The projection in Korea is that we will be in need of at least 10,000 experts in the field of AI in the next five years.

Q. Do you think universities in Korea are responding adequately to the changes?

A. I think we can start to respond adequately from now on. Korea University, for instance, established the College of Informatics in 2014. In the upcoming fall semester we will be establishing a graduate school on AI at the university. The school will take up to 50 candidates for masters and Ph.D. studies in AI every year, and all of their tuition will be covered by scholarships. Key areas of studies will be deep learning, natural language processing, voice recognition, big data and AI network. We will also be researching how best to apply AI technology to health care, the field of finance, autonomous cars and national defense.

How will the rest of the university body respond to the changes of the fourth Industrial Revolution?

The university’s vision is to educate and train students who can mix different disciplines of academia and are harnessed with creativity that can take on the evolving challenges of the world. I’m talking about double majors, interdisciplinary majors, strengthening of basic sciences, supporting start-ups and comparative studies. We cannot foster leaders by dividing them into disciplines of science and technology versus liberal arts.

To be more specific, at Korea University, from this coming fall semester, we will be creating an independent department of psychology (which was previously part of the liberal arts school), and students enrolled in the department will be able to take courses in all disciplines, such as AI, cognitive science, humanities and sociology studies, engineering, medicine and more. This is an example of education through convergence of various disciplines.

University tuition rates in Korea have remained frozen for years. How is Korea University faring?

Honestly I would like to see a more realistic approach [by the government] on the tuition rates.

The Moon Jae-in government has plans to reduce the rate of early admissions across universities in the country. Will the early admission rate at Korea University change in the near future?

This year, we are selecting 83.6 percent of the new student body (4,084 students) based on early admissions and 16.4 percent based on the students’ College Scholastic Ability Test (CSAT) scores. The rate will be similar next year. But by 2022 [when universities will be required to admit at least 30 percent of their new students based on their CSAT scores], the rate will have to be adjusted.

The Moon Jae-in administration has been calling for a simpler college admissions system to reform the country’s education system, which is stratified by wealth and status, as satirized in the popular TV series, “Sky Castle.”

What are your visions for the university?

I have two specific visions for the university. One is to have a member of the university win the Nobel Prize in the field of science by creating successful research through creative convergence of various scientific disciplines.
Another vision of mine is to have Korea University be ranked as one of the top 50 universities in the world by 2030.


How feasible are your visions?

There is no such thing as impossible. We landed a man on the moon! The leader’s job is to set a goal. They had a goal to land a man on the moon, and they did it. It’s the same mechanism at play. The goal provides the motivation to keep on challenging yourself and pushing yourself forward. I look forward to the day when one of our graduates will win the first Nobel Prize in science.

Do you have a strategy to make a Nobel Prize winner at the university?

The key rests on interdisciplinary research, the university’s network with various industries and academic institutes and how much of our work pitches into society. We will change the way people conduct research in Korea, we will be supporting the highly cited researchers and those who publish in the top academic journals in the world. It is the privilege of the [intellectuals] to challenge the world.