Immersive installations ask visitors to take a step inside: Works by Fred Sandback at Gallery Hyundai show how art can co-exist with space

Immersive installations ask visitors to take a step inside: Works by Fred Sandback at Gallery Hyundai show how art can co-exist with space

Visitors to Gallery Hyundai’s upcoming exhibition, “Fred Sandback - Obangsaek,” are encouraged to walk in and out of the pieces on display to enjoy them from various angles. At left is “Untitled (Sculptural Study, Three-part Construction)” (1986/2019) and right, “Untitled (Sculptural Study, Seven-part Construction)” (1993/2019), both of which are located in the basement floor of the gallery. [GALLERY HYUNDAI]

Some artworks demand viewers to think deeply about the meaning beyond what’s in front of their eyes, but not Fred Sandback (1943-2003). The American sculptor, as he calls himself, demands viewers not to think, but to simply move around and see how his works change their shape with each step they take.

The secret to enjoying Gallery Hyundai’s brand new exhibition, “Fred Sandback - Obangsaek,” is the same. The show, which opens Wednesday at the gallery in central Seoul, invites visitors inside not only the exhibit space, but also inside the works themselves, to appreciate Sandback’s works from every possible direction.

“The title of the exhibition, ‘Obangsaek,’ was suggested by the Fred Sandback Estate, to celebrate the special exhibition held in Korea,” said Kim Jae-seok, the creative director of Gallery Hyundai. Obangsaek refers to the five cardinal colors in Korean culture. “So for this event, we have chosen 29 works that use the colors red, blue, yellow, black and white among his vast archive of works. This is the first time for an exhibition in Korea to look at Fred Sandback’s works from his earlier years as a student up to his final pieces, as well as some works that had never been put on display before.”

The exhibit begins with “Untitled (Sculptural Study, Six-part Right-angled Construction)” (1976/2013), where multiple L-shaped black strings stand in the middle of the hall creating what the sculptor called a “situational context.” In contrast to how people would normally expect to encounter art at a gallery - framed and on a wall - Sandback’s works form a new and unique relationship with the space that contains it, and the relationship that the visitors form with the works as they move about the gallery. In the case of the first L-shaped piece, visitors are encouraged to walk within and around the work, to feel how the thin and simple string makes them feel as if they’re walking through a path that changes its shape from different angles.

A small, yet vital work sits in the corner of the first floor - “Untitled (Vertical Corner Piece) [LLR]” (1968), which he created in his earlier years. Three long, blue cubes sit on the corner, a place that’s easy to overlook. The three look slightly different, with different dimensions of width and length, but have actually the same volume as a whole.

“People don’t look at the corners, especially in art galleries,” said Kim. “But Sandback looked at the artistic potential of a corner. Corners are where the sides of the walls meet to create a new aspect. There, he installed a ‘transparent sculpture’ that looks flat from a certain angle, but 3-dimensional from another. He wanted to have people see how a geometrical shape could influence the whole space it’s sitting in.” 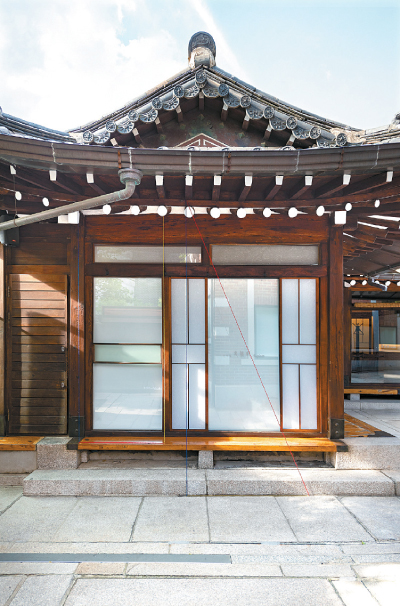 Three special exhibits will be on display until Aug. 30 at Dugahun, the restaurant located right next to Gallery Hyundai. [GALLERY HYUNDAI]

There are no set routes for the first floor, but visitors are also recommended to visit the second floor, where various works such as the group of red strings stretching from the floor to the ceiling called “Untitled (Sculptural Study, Ten-part Vertical Construction)” (1993/2019) and rectangles of different colors overlapped with each other with “Untitled (Sculptural Study, Three-part Construction)” (2002/2010) are in.

One interesting work on the second floor is “Untitled (Broken Line Polygon)” (1996). The pentagonal shape made with colored string is actually the only work where the string has been created by Sandback himself. He colored the string - bought from a common market - and stuck it on the wall of his studio to see. The strings used in other works were purchases and installed just for this exhibition, and will be thrown away once it is over.

Sandback’s works are unique in that what’s most important is how the strings are shaped and placed, not what type of string is used or whether it’s the original string used by Sandback. Once a work is set to be displayed in a certain place, whether a museum or a gallery, the estate sends a design plan and a mechanic to install the works. But every piece can be altered to fit the space it will be in.

For instance, the long three-string piece that stretches from the basement floor of the gallery to the ceiling of the first floor, the “Untitled (Sculptural Study, Three-part Construction)” (1986/2019) is 7.6 meters (25 feet) long. They would be much shorter in a space with a lower ceiling, but what’s important is that the three strings are set in a certain distance from each other as planned by Sandback.

“Sandback called himself a sculptor, not because he sculpted things himself, but because he sculpted space with his works,” Kim said. “He made it clear that he wasn’t a minimalist, and that he does not wish to be called by any artistic school’s name. What was important for him was for people to just see what they see without interpreting it, to see how art can co-exist with architecture and space.”