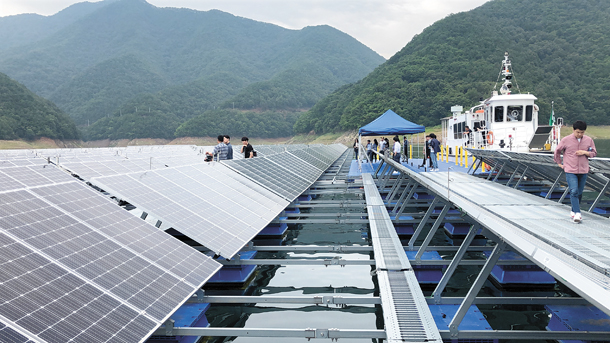 The overview of the floating solar power farm on Cheongpung Lake. [LEE HO-JEONG]

CHUNGJU, North Chungcheong - Endless rows of dark-blue solar panels floating on the calm surface of Cheongpung Lake in North Chungcheong appeared after a boat ride that lasted for less than 10 minutes on a cloudy Thursday afternoon.

Despite the earlier weather forecast of a downpour in the region, it only drizzled lightly for a brief period, adding to the tranquility of the floating solar power plant, which was surrounded by nothing but mountains.

It felt as though even a whisper could break the serene scene.

“[The floating solar power plant] is located 17 kilometers (10.6 miles) away from Chungju Dam where our staff [that manages the farm] works, which makes maintenance inconvenient,” said Joo In-ho, the general manager of the floating photovoltaic business at the state-owned water resource management agency K-water. “However, we set up the farm because of a remote village of seven houses that’s only 3 to 4 kilometers away.” Joo added, “By installing the floating solar power farm, the village has been supplied with electricity for the first time.”

He added that with the installation of the power farm, a new road was constructed that shortened the traveling distance to the remote village by 30 minutes.

The floating solar power plant is made of 8,812 photovoltaic modules - each measuring 1 meter in length and 1.96 meter in height - and covers a 39,600 square-meter area of the lake.

K-water invested 8.4 billion won ($6.9 million) in the project that took 10 months to complete.

The power plant opened in December 2017 and has a 3-megawatt capacity that generates 4,031 megawatt hours of power a year. That translates to a year-long supply of electricity for 1,000 households.

Since President Moon Jae-in announced the phase out of nuclear energy early into his administration, the current Korean government has set the goal of raising the contribution of renewable energy, which was 7.6 percent in 2017, to 20 percent by 2030 and to 35 percent by 2040.

“The renewable energy business at Saemangeum will be a groundbreaking turning point that will raise our renewable energy industry’s competitiveness to the level of the world,” President Moon said during a speech he made standing in front of solar panels at Saemangeum, Gunsan, North Jeolla, “It is a healthy energy that protects the public’s safety and a new growth engine that will open our future.”

“Last year ours only accounted for 8 percent,” Moon said. “And more than half was [generated by] waste power generators,” Moon added. “[Our government] will raise the contribution of renewable energy to 20 percent by 2030.”

In July, the Korean Ministry of Trade, Industry and Energy approved the 4.6 trillion won plan for the Saemangeum floating solar farm, which once completed in 2025 will have a 2.1 gigawatt capacity.

The farm will cover a 30 square-kilometer area and generate 2,759 gigawatt hours a year, enough to power roughly 1 million households. 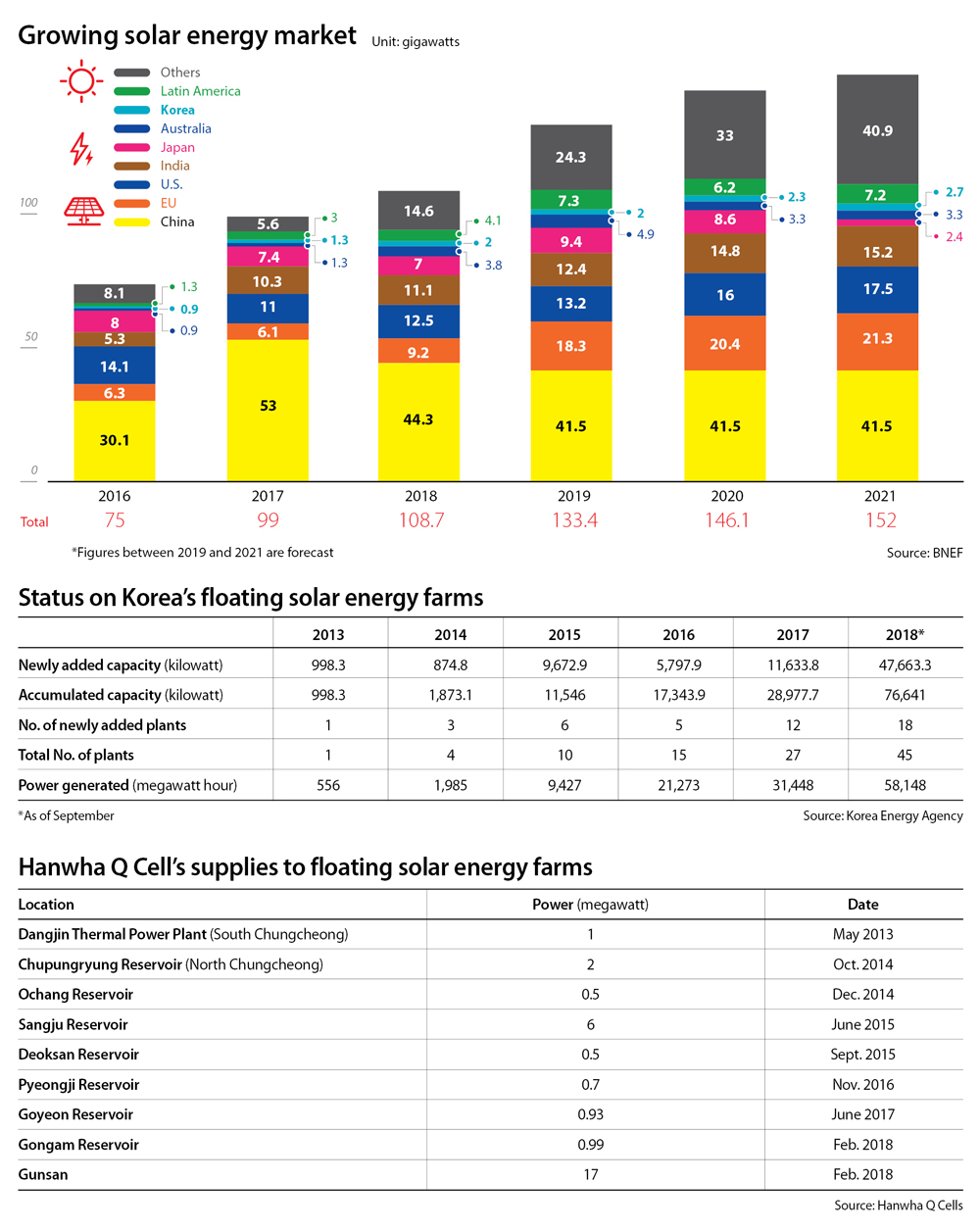 The government estimates the solar power farm will generate an economic effect of 25 trillion won over 10 years.

The market for floating solar power farms is rapidly growing.

According to a 2019 World Bank report, the global capacity of floating photovoltaics has been growing at an exponential rate, especially in the last four years.

China currently leads with 950 megawatts, which accounts for 73 percent of the world’s capacity, while Japan trails behind with 208 megawatts or 16 percent. Korea takes third place with 75 megawatts or 6 percent.

Floating solar power farms are a great option for Korea, which has limited space.

“Sixty-four percent of the land in Korea is forest,” said Joo, the general manager at K-water. Joo said to install a power farm with 3-megawatt capacity, a 37,000 square-meter area is needed. “We can’t just cut down trees to install solar power plants.”

According to a World Bank report, installing a solar power farm on just 1 percent of the world’s reservoir surface, could secure a 404 gigawatt capacity and could replace 404 1-gigawatt thermal power plants.

It could also generate roughly 521 terawatt hours, the equivalent to 15 percent of all power consumed in Europe in 2018.

Another advantage of solar power farms built over water to those on land is the improvement in efficiency.

“The solar modules in Korea are made of crystalline silicon, of which quartz is the raw material” said Joo. “The biggest influence to this module, which has a standard test condition of 25 degrees Celsius, is temperature.”

The K-water official said contrary to common belief, higher temperatures do not translate to larger outputs. In fact it is the opposite. When the temperature rises above 25 degree Celsius, photovoltaic modules output actually drops.

It is estimated that every 1 degree Celsius the temperature rises after 25 degrees Celsius leads to a 0.5 percent output efficiency drop.

“But here, on average the temperature remains around 26 degrees Celsius,” Joo said. “During summer, the power output is larger than anywhere else.”

The company is reportedly preparing to not only sell its modules, but also expand its participation including designing the farm and constructing it. Major competition includes Hyundai Energy Solutions, an affiliate of Hyundai Heavy Industries. 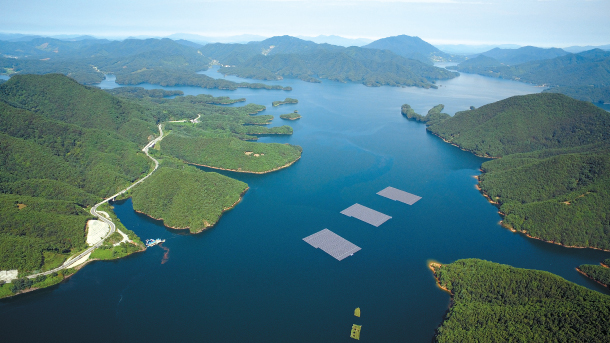 Hanwha Q Cells is not only Korea’s leading solar photovoltaic cell manufacturer but also the world’s. It currently holds the top market share in countries like the United States, Japan and Germany. The company has already either supplied or participated in the construction of floating solar power plant projects whose combined capacity amounts to 30 megawatts.

The company, which was founded in 2004 as Solarfun Power Holdings, later expanded by acquiring Germany’s Q Cells in 2012, which helped it to become the world’s third-largest solar energy company.

The floating power farm which covers a 15,800 square-meter area of the reservoir generates 1,800 megawatt hours that supplies power to 400 households.

“If floating solar power plants are gradually installed on 1 percent of the world’s reservoirs, based on the current construction cost, a global market of more than 500 trillion won will be opened,” said Jerry Yu, vice president at Hanwha Q Cells. “If Korean companies build up experience from local projects, floating solar power plants will become Korea’s new growth engine.”

IBK Securities analyst Ham Hyung-do said Hanwha Q Cells is one of the few companies that have the technology on monocrystalline silicon cells.

“Korea could only succeed in photovoltaic module because the components are the same as semiconductor chips but the process is less than that of semiconductors,” Jeong Jae-seong, senior researcher at Korea Electronics Technology Institute said. “And since Korea is the world’s No. 1 in semiconductors, naturally Korea also excels in this field.”

According to K-water’s Joo, foreign countries especially countries like Indonesia and Vietnam that have huge body of waters are taking interest in Korea’s floating solar power plants.

“They are the most frequent visitors to our plant on Cheongpung Lake,” Joo said. “These are countries that have an abundance of water resources but struggle with supplying electricity due to the lack of power grids.”

However, Professor Roh Tae-ho, chief researcher at Korea Environment Institute said while their studies of floating solar power farms have not shown any environmental damages or concerns, the institute has not yet conducted any studies on floating power plants on open water.