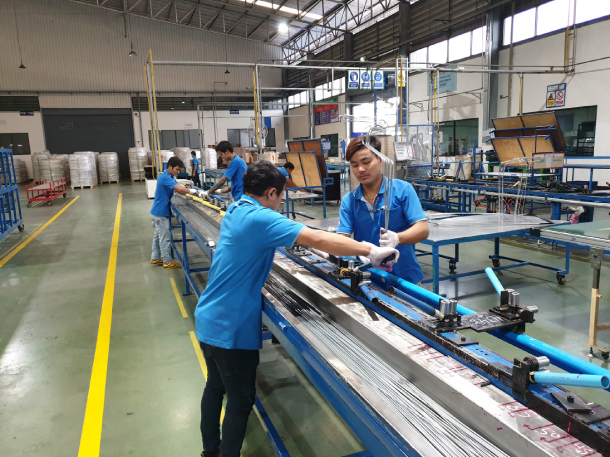 BANGKOK, Thailand - The ongoing U.S.-China trade conflict has put a spotlight on Southeast Asia as an alternative manufacturing base to replace China as multinational companies and their parts suppliers are moving production out of the country to skirt punitive duties.

Thailand hopes to cash in on the shift, with the Thai government set to announce a set of incentives for foreign companies moving in to the second largest economy in Southeast Asia.

Some Korean companies are also mulling moving their production lines to Thailand.

“There are some cases of consultation where Korean companies consider relocating their production to Thailand,” said Youn Jang-og, a manager at Korea Trade-Investment Promotion Agency (Kotra)’s Bangkok office, while declining to state the specific number of the companies.

South Star is one Korean company that already operates in Thailand and has seen a recent bump in interest from its Korean peers.

“Many companies whose production was in China are switching their production lines out of China due to the trade dispute,” said Ahn Hak-in, managing director of the air conditioner parts manufacturer based in Chonburi, a Thai province on the eastern gulf.

Ahn used the example of Dayou Winia, a Korean home appliance maker, which established a new factory in Thailand back in May.

For Korean corporations, Thailand’s advantages as a production base have often been overshadowed by other neighboring countries, such as Vietnam and Indonesia.

“Thailand has a skilled pool of laborers and the government is open to foreign companies and provides different packages of tax benefits and exemptions on duties on raw materials,” the managing director said.

“Many Koreans perceive Thailand as a tourist destination, not as a place for business,” she said.

Putting aside the widely-held perception, a lack of Korean banks and a strong presence of Japanese companies have also kept Korean companies from entering Thailand.

“Since there are not many Korean banks operating in Thailand, small and medium sized companies often fear that raising capital would be challenging while running business there,” Youn said.

According to the data provided by Kotra, only three Korean financial institutions, including Samsung Life Insurance and Korea Development Bank, are established in Thailand.

The lack of a Korean banking presence is linked with a tough regulation that requires a minimum capital of nearly $800 million for a foreign bank to operate in the country.

Another negative factor behind the relatively tepid interest so far lies in the strong footing of Japanese companies.

The number of Korean companies stood at around 400 while that of Japan amounted to approximately 7,000, according to Kotra data.

Still, there is a glimmer of hope as the number of Korean companies has grown, albeit slowly.

“In the beginning, major electronics companies and big companies like Posco made inroads into Thailand,” Youn said, “but the industry sectors have been more diverse, as retail players like cosmetics producers and TV home shopping networks came in.”

The growth could be partially attributed to the government’s tax incentives aimed at attracting foreign investment.

In the wake of the trade dispute, the relocation package will target investors from China, Japan, Korea, Taiwan and the United States, according to Deputy Prime Minister Somkid Jatusripitak.