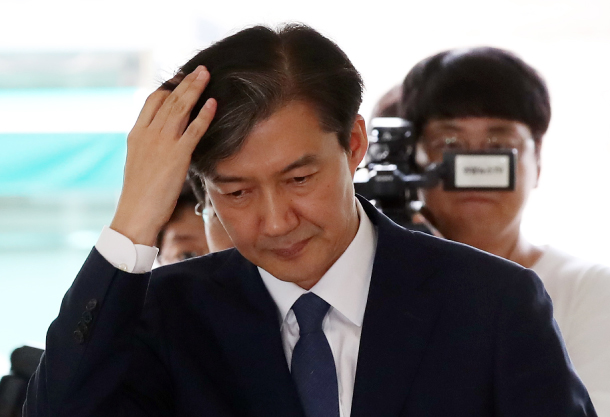 Justice minister nominee Cho Kuk apologized on Sunday for the allegations surrounding his 28-year-old daughter, saying he was sorry to the general public for having failed to pay enough attention to his “child’s issues.”

Cho, however, refused once again to withdraw as justice minister nominee, saying he needed to accomplish the Moon Jae-in administration’s key agenda of reforming powerful agencies.

It was the first time Cho, who until July served as Moon’s senior secretary for civil affairs, directly apologized for suspicions regarding his daughter to the press, less than a week after local media outlets started going to town with coverage on the medical school student.

Cho’s daughter, who currently attends Pusan National University’s Graduate School of Medicine, faces allegations she was wrongly cited as the first author of an English-language paper published in the Korean Journal of Pathology in 2008 and used that accomplishment to gain admission to Korea University in 2010. Cho’s daughter was a student at Hanyoung Foreign Language High School when the paper was published, and had finished a two-week internship at the Medical Science Research Institute of Dankook University’s College of Medicine. The professor who oversaw the internship and the research paper is the father of Cho’s daughter’s high school friend.

Dankook University announced last Thursday it will launch an internal probe to confirm whether Cho’s daughter was given undeserved credit.

Cho said Sunday morning as he was entering his office in Jongno District, central Seoul, that he admits he was a “clumsy and easygoing” father, though with his professional career, he tried to become a “reformist.”

Saying his daughter “followed laws that were present at the time” in gaining experiences outside of school, Cho said he still thought those experiences eventually inflicted “pain” to many young adults and members of the public today because others in society could not access those opportunities themselves. Cho said his family overlooked the fact that those opportunities could lead to “maintaining vested rights.”

Cho vowed to clear up any misunderstandings at his confirmation hearing.

Minister nominees in Korea are subject to confirmation hearings conducted by the National Assembly before their formal appointment, but by law, the president doesn’t need endorsement from the National Assembly to appoint ministers. That means Moon can go ahead and appoint Cho even without the blessing of opposition parties.

Yet for weeks, the main opposition Liberty Korea Party (LKP) has called on Moon to recant his decision to tap Cho as head of the Ministry of Justice and filed complaints with prosecutors to press criminal charges against Cho and his daughter, all the while refusing to set a date for the confirmation hearing with the ruling Democratic Party (DP), which still backs Cho.

By law, the National Assembly has until Friday to hold Cho’s confirmation hearing. The DP said last Friday that if the LKP refuses to settle on a date by today, it would start preparations from Tuesday for the Journalists Association of Korea or the Korea Broadcasting Journalist Association to organize a so-called public confirmation hearing on Cho, where audience members can ask the nominee questions.

Rep. Na Kyung-won, floor leader of the LKP, lashed out at the plan, saying it was “astonishing” how the DP thought they can make Cho a “fake minister” through a “fake confirmation hearing.”

In a survey conducted by Hankook Research from last Thursday to Friday via telephone and published Sunday, 48 percent out of 1,015 people across the nation said they thought Cho was unfit for justice minister, while only 18 percent said they thought he was fit for the job. The rest answered they did not know or that it was difficult to say at this point whether he was fit or not, apparently meaning they would decide after the confirmation hearing.