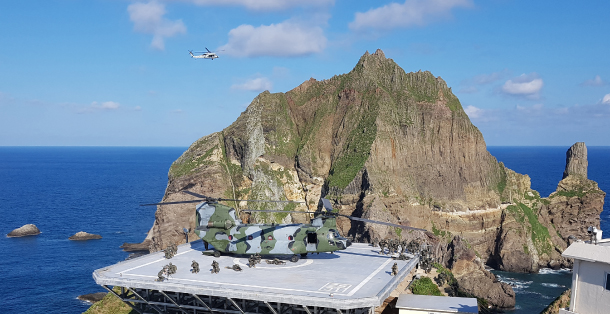 Korean marines land on one of the Dokdo islets on Sunday as part of a two-day exercise to defend Korea’s territories in the East Sea. The regular drills, which include troops from all branches of the country’s armed forces, come amid Japan’s economic retaliations over several historical issues. [YONHAP]

The Korean military on Sunday kicked off its long-postponed exercises to defend the Dokdo islets, just days after Seoul withdrew from an intelligence sharing pact with Tokyo.

The two-day drill on the islets, which Japan lays claim to, bear witness to a defensive posture from Korea against Japan’s refusal to reach a diplomatic solution to their ongoing dispute stemming from a host of thorny historic issues.

According to the Korean Navy, the drill was named “East Sea territory defense exercise” in consideration of its enlarged size and its significance of defending Korea’s easternmost territories like Dokdo. Troops from nearly all branches of the country’s armed forces - the Navy, Army, Air Force and Marine Corps - will be taking part in the exercises, which are being held on a larger scale than usual.

The military also deployed its most advanced armaments for the drills, including its Aegis Combat System-equipped Sejong the Great-class destroyer and 10 F-15K fighter aircraft.

Japan’s Foreign Ministry immediately demanded Korea halt the drills, conveying through its diplomatic channels that the exercises were “impossible to accept.” While referring to the islets as “Takeshima,” the Japanese government laid out its usual claim that they are part of its territory.

Korea’s Blue House on Sunday afternoon dismissed such protests from Tokyo. Its spokesperson Ko Ming-jung said the exercise was meant to “guard our sovereignty and territory” and had no ulterior political meaning.

While typically held twice a year around June and December, this year’s Dokdo drills had been postponed due to the sensitive nature of recent relations with Japan, which regularly issued diplomatic protests against them in earlier instances.

It was speculated that the exercises would begin sometime around Korea’s celebration of its liberation day from Japanese colonial rule on Aug. 15 in response to Tokyo’s recent economic retaliations, but unfavorable weather in the East Sea and the summertime joint exercises with the United States led to such plans being shelved.

Sunday’s drills follow a momentous decision by Seoul on Thursday to withdraw from the General Security of Military Information Agreement (Gsomia) with Japan, a move in stark contrast to the more ambiguous approach the Korean government had taken in recent weeks so as not to escalate the row with Tokyo.

In July, Japan enacted tougher restrictions on its export of key industrial materials to South Korea, baselessly claiming that the items may have made their way into North Korea to be used for the latter’s chemical and nuclear weapons program. This, as well as Tokyo’s removal of Seoul from its so-called white list of preferred trade partners, is believed by many to be in retaliation of the Korean Supreme Court’s rulings ordering compensation for wartime forced laborers. In spite of Japan’s hostility, Korean President Moon Jae-in tried to seek diplomatic negotiations with Tokyo to settle these economic issues, even extending an olive branch in his ostensibly toned-down Liberation Day address, but Japan’s Shinzo Abe administration showed no interest in backing down from its recent economic measures.

Seoul cited “serious changes” to its security cooperation with Tokyo as a result of Japan’s security-related claims to its economic actions when announcing its decision to withdraw from the Gsomia pact. Intel-sharing between the two countries, both key allies of the United States, is due to come to a halt starting from November, though South Korea’s Joint Chiefs of Staff said it traded information with Japan on Saturday about North Korea’s most recent weapons test.

The islets remain one of the most contentious issues between the two countries. Korea has controlled the territory since its liberation from Japanese colonial rule in 1945, but Tokyo continues to dispute the islets’ sovereignty on a tenuous historical basis.