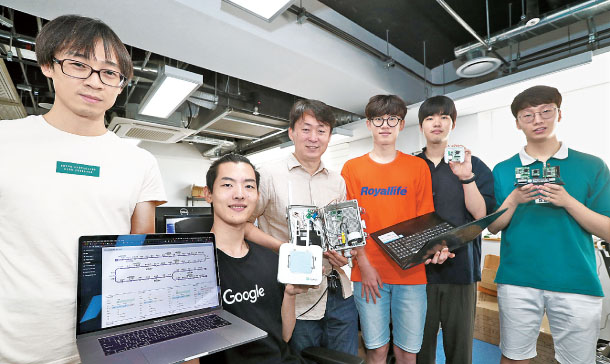 Employees of Toy’s Myth, a start-up headquartered in Seoul Startup Hub in Mapo District, western Seoul, showcase on Wednesday their smart sensor products that can measure foot traffic and levels of fine dust and carbon dioxide in the air, which have been installed in the stations of subway line No. 5. [JANG JIN-YOUNG]

Start-ups in Seoul looking to join hands with international partners to export their artificial intelligence (AI), Internet of Things (IoT) and big data technology will showcase their inventions at Start-Up Seoul 2019 at Dongdaemun Design Plaza in eastern Seoul from Sept. 4 to 6.

Toy’s Myth develops IoT sensors that can collect information on foot traffic, fine dust and carbon dioxide levels. Seo, 46, created the start-up on his own in 2012. The company now has 15 employees with annual sales worth around 1 billion won ($826,095).

“We have been looking for opportunities to work with partners abroad to export this technology, and one of them we are considering is the Mass Rapid Transit Authority of Thailand,” Seo said. “The authority is looking to install smart sensors in subway stations and inside subway cars. It’s going to be a $2.5 million contract for the next three years for a company that partners with it.”

Gomi, another start-up headquartered in the Seoul Startup Hub, will also be present at the fair next month to introduce its products to international investors.

“To understand our product, think of it as something like Coupang [an online shopping platform in Korea] in Vietnam,” said Jang Keon-yeong, CEO of Gomi. “We connect brands in Korea that are well-recognized in Vietnam with the market there. Our monthly sales are around 200 million won.”

A total of 10 start-ups will get a chance to pitch their products in front of some 150 investors and ordinary citizens at the Start-Up Seoul: Tech-Rise 2019 fair.

“We heard that the vice president of Mass Rapid Transit Authority of Thailand will be present at the event,” Seo said.

Start-Up Seoul 2019 is a fair organized by the Seoul city government for the first time this year to help match start-ups in Korea with investors and partners abroad.

Around 200 start-ups from Korea will be participating in the fair, joined by 300 start-ups from 20 cities including San Francisco, London and Beijing. Around 50 incubators including Creative Valley of France, Rocket Internet of Germany and Revolver Asia of Singapore will also be present at the fair.

Panels will also be hosted during the three-day fair, with speakers including Startup Genome CEO J.F. Gauthier and Grab Ventures CEO Chris Yeo. “Just within the first quarter this year, we’ve opened 58,694 start-ups in the country,” said Choi Pan-kyu, head of the start-up investment division of the Seoul Metropolitan Government. “Of them, 24 percent was based in Seoul. This fair will help the world learn more about the state of start-up development in the country and pool the financial, human and technological resources into one place.”