Less chaebol expect to offer jobs in second half

Less chaebol expect to offer jobs in second half 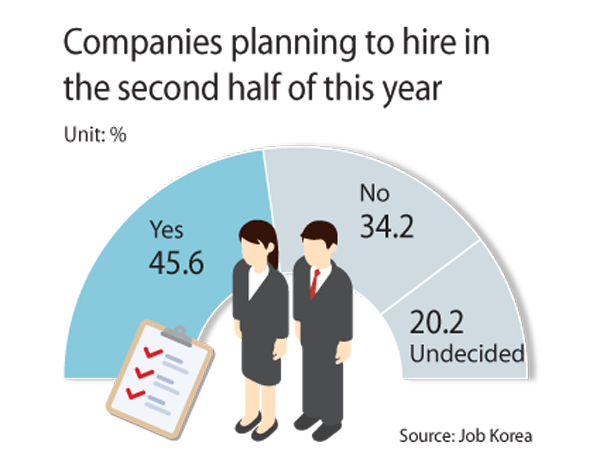 The number of job openings for university graduates at conglomerates is likely to shrink on year in the second half of this year.

The number of jobs offered by big firms in the second half is likely to shrink from 32,060 last year to 30,841 this year, according to the job search website Job Korea on Monday. The survey showed that less than 50 percent of conglomerates that took part in the survey were willing to recruit new employees in the July-December period.

Among the 248 participants, 113 companies, or 45.6 percent of respondents, said they will recruit university graduates in the second half, while 34.2 percent said they don’t have hiring plans. The remaining 20.2 percent said they haven’t yet decided on their recruitment plans.

The total number of job openings for university graduates is estimated to stand at 30,841 for the July-December period, which is 1,219 people, or 3.8 percent, less than the same period last year.

By sector, electronics firms had the largest number of job openings, at 13,075 positions, followed by the automobile and airline sector at 10,060 and petrochemical and energy sector at 40,160.

Despite the reduction in the number of new jobs, most major conglomerates, including CJ Group, SK Group and Lotte Group, said they will begin hiring in the first week of September. The three conglomerates will hire similar numbers of employees as they did during the second half of last year.

Samsung Electronics also said it will open hiring, although it has not revealed specific details on dates. Hyundai Motor recruits new employees year-round and has plans to open a specific hiring period in September.

Although it has ditched its conventional biannual recruitment system, the automaker plans to hire a similar number of employees as it did in last year’s second half, according to Job Korea.