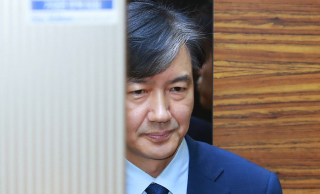 Justice minister nominee Cho Kuk waits in the elevator of a building in Seoul after presenting his plans for prosecution reforms to reporters Monday. [KANG JUNG-HYUN]

When Princeton University professor Alan Kruger, who passed away in March, was the chair of the Council of Economic Advisors at the White House in 2012, he came up with the “Great Gatsby Curve” as an indicator of relationship between income inequality and social mobility to criticize economic inequality. It is named after the main character of “The Great Gatsby,” who is born to a poor farmer and accumulates a great fortune on his own.

University of Ottawa Professor Miles Corak analyzed the Gini coefficient and intergenerational income elasticity. In countries with a low Gini coefficient, like Denmark and Norway, people born in poor households could move up to another class. But in the United States, where income inequality is high, a parents’ income affects the next generation, and social mobility is not easy.

Korea is no different. Seoul National University Professor Ju Biung-ghi published the “opportunity inequality index” in February, investigating the academic background and income level of parents and the grades of their children. Kids of parents with lower educational levels are less likely to get high scores. According to the OECD’s report in July, it takes five generations, or 150 years, for the bottom 10 percent income earners to enter the average income group.

The alleged resume-building of the daughter of justice minister nominee Cho Kuk revealed that economic inequality is not the only reason why the ladder between classes is broken. A high school student who worked as an intern during a vacation for two weeks became the first author of a medical paper. She also became a third author for a draft of an academic paper after serving as an intern from March to August at a university lab 130 kilometers (81 miles) away from her home. If she did not go to her high school during the period, she would not have met the attendance requirement. If any of these allegations are true, the Great Gatsby Curve — a pronouncement of death for the low income community — looks rather cute.