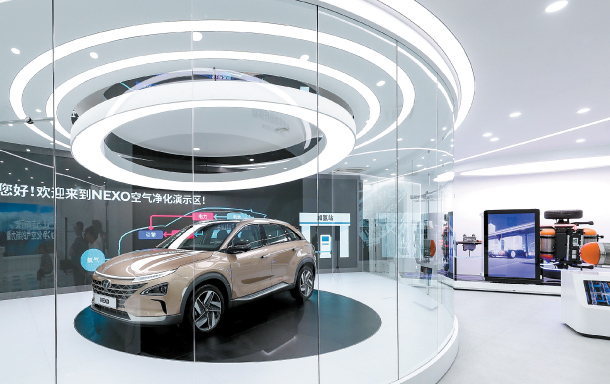 Hyundai Motor Group on Monday opened an exhibition center in China to display its vision of a hydrogen economy where hydrogen becomes the major source of energy not only for cars, but in all areas of society.

The exhibition will run for two weeks through Sept. 8. It is located in the center of Shanghai’s Century Square, linked with the city’s main shopping streets.

The center houses demonstrations of Hyundai’s fuel-cell electric vehicle Nexo purifying air, a display of Nexo’s internal mechanical parts and exhibits showing a vision of a future society powered by hydrogen. According to Hyundai, the Nexo SUV can filter 99.9 percent of ultra-fine dust particles while driving.

The Korean automaker said in a statement Monday that visitors will be able to learn “how hydrogen contributes to the sustainable economic and social development of China” through the exhibition.

“Through Hyundai Hydrogen World, we aim to spread understanding of our technological competence and vision for a global hydrogen society, which we have uniquely accumulated over the years,” said Lee Byung-ho, president of Hyundai Motor Group China.

The automaker added in statement that it hopes to gain a first mover’s advantage in the growing hydrogen economy and recover its recent slowdown in sales, particularly in China, one of the world’s largest electric vehicle markets.

As Hyundai Motor Group moves to bolster its presence in the world’s hydrogen market, it announced late last year the “fuel-cell electric vehicle (FCEV) vision 2030,” a mid- to long-term roadmap to bring about a hydrogen-powered society and said it will establish a production system to make 500,000 FCEVs per year by 2030.