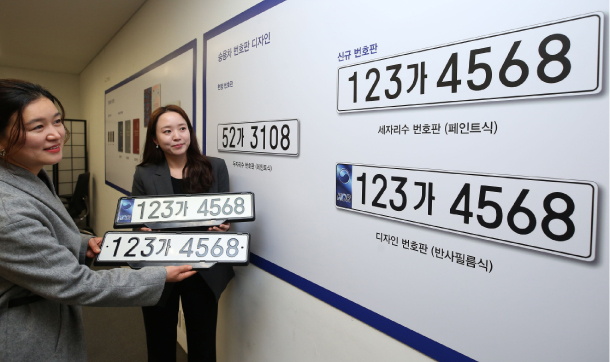 With new eight-figure license plates rolling out in Korea next month, 30 percent of private parking lots in the country are still running on systems that are unable to recognize the design.

According to regional governments and the Ministry of Land, Infrastructure and Transport, a total of 22,000 parking lots nationwide need system updates to recognize the new plates. Starting from next month, Korean license plates will consist of seven digits and one Korean letter, instead of the previous system of six digits and one letter. Of those 22,000 parking lots, 87.6 percent have completed upgrades.

But figures show a large gap between the number of public and private facilities that have upgraded their systems.

For public-owned parking lots and buildings, 97.9 percent will be updated to recognize the new plates by the end of this month. The completion ratio has already hit 100 percent for police speed cameras and the Korea Expressway Corporation cameras installed at tollgates.

But private-owned parking lots, shopping malls and hospitals are a different story. The anticipated update completion rate by the end of this month is just 70.4 percent. In other words, cameras at three of every 10 private parking spots will not recognize the new plates. Around 150,000 to 160,000 vehicles in Korea are expected to be on the roads with the new eight-figure plate next month.

If the camera system fails to recognize the plates, vehicles won’t be able to enter parking lots. Even if they manage to do so, there’s a high possibility that problems will occur when calculating payment at the exit gate. A delay for a car with the new plates could also lead to queues affecting other following vehicles as well.

Breaking down system implementation by region doesn’t look good either.

In Seoul and Busan, around 80 percent of private parking lots have completed updates for the new plates. The situation is far worse in South Chungcheong, where the proportion plummets to just 20.2 percent. North Gyeongsang, at 20.4 percent, South Gyeongsang, at 47.7 percent, Incheon, at 51.1 percent, and North Jeolla, at 51.9 percent, aren’t much better.

Late last year, the Transport Ministry announced plans to replace the seven-figure license plates and add one digit. The issuance of the old license plates had reached its saturation point, it said.

As well as the extra figure, the design of license plates will be upgraded. From July 2020, blue holographic plates designed to prevent forgery will be distributed. The design was supposed to be introduced next month but was delayed due to technology issues. Plates will be painted until next year. The issuance of the holographic plates could also mean another camera update is needed next year.

The possible need to upgrade next year is one thing that may explain why the private sector has been so slow in upgrading its systems this time around. It typically costs between 300,000 won ($247) to one million won to enable a camera to recognize the new plates.

In response, the Transport Ministry and regional governments are planning to station personnel to help parking lots that can’t recognize eight-figure plates and manually control gates when the new plate first rolls out.