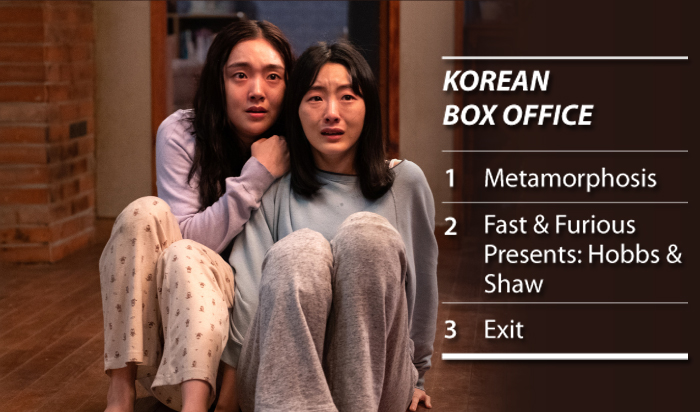 Local horror film “Metamorphosis” snatched the top of the box office from “Fast & Furious Presents: Hobbs & Shaw” over the weekend as audiences hoped to cool off and get a good scare during the remaining days of summer.

The horror-thriller sold 572,000 tickets at 975 screenings over its debut weekend. The local film became the first horror film to reach the number one spot since March 2018, when “Gonjiam: Haunted Asylum” topped the box office.

The story centers around a demon who turns a peaceful family’s life upside down by using its ability to metamorphosize. The family spends sleepless nights filled with fear, hatred and rage as the demon randomly takes shape amongst the four, doing horrible things to everyone else. In the midst of the chaos, their mysterious exorcist uncle named Jung-soo shows up unexpectedly to help the family rid themselves of the demon.

Meanwhile, the popular “Exit” held on to the third spot for the second week in a row by selling 454,000 tickets at 867 screens. Over the past week, the film sold over 1 million tickets, bringing its total ticket sales to 8.3 million.

Historical fiction film “Jesters: The Game Changers” ranked fourth in its first weekend, selling 284,000 tickets for 754 screenings. Based on actual written records in the Records of King Sejo in the Annals of Joseon Dynasty (1392-1910), the film explains that the bizarre “miraculous” phenomena that happened at the end of King Sejo’s reign were the work of five exceptionally talented jesters who could fool anyone with their clever tricks and schemes.

The quintet was hired by the king’s most trusted adviser Han Myeong-hoi to spread good words about the King who rose to power through a coup d’Etat. Worried that he will be forever branded as a traitor and with the hopes that he can securely pass the throne on to his young son, Han orders the jesters to come up with “god-sent” signs that can convince the people of Joseon that the King is worthy of his title.

Another historical fiction flick, “The Battle: Roar to Victory,” about the Independence Army fighting for the country’s freedom from Japanese colonialism (1910-1945) finished the weekend in fifth place, selling 264,000 tickets at 771 screenings.