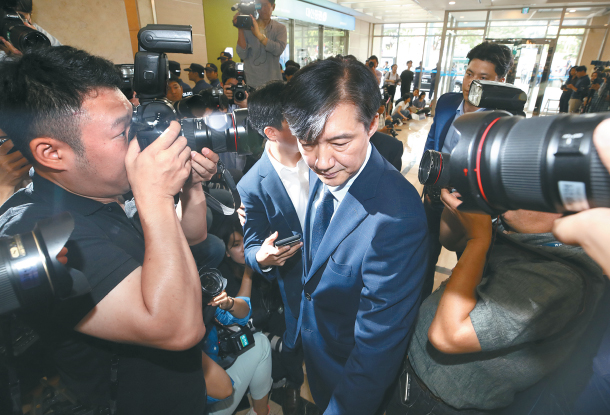 Cho Kuk, the justice minister nominee, arrives at his office in Jongno District, central Seoul, on Monday morning, a week before his scheduled confirmation hearing. [YONHAP]

Justice minister nominee Cho Kuk’s confirmation hearing will be held for two days next week at the National Assembly in Yeouido, western Seoul, lawmakers of the Legislation and Judiciary Committee agreed Monday.

Cho will be called in next Monday and Tuesday to answer a legion of questions surrounding his family wealth and investments - as well as his 28-year-old daughter, who faces allegations she was wrongly cited as the first author of an English-language research paper in the Korean Journal of Pathology in 2008 after a two-week internship at Dankook University, and used that accomplishment to gain admission to the prestigious Korea University in 2010 and Pusan National University’s medical school in 2015.

For days, lawmakers of the main opposition Liberty Korea Party (LKP) refused to set a date for Cho’s confirmation hearing, saying President Moon Jae-in should recant his decision to tap Cho as his justice minister.

The LKP then asked the ruling Democratic Party (DP) for the hearing to be held for three days in early September, apparently to buy more time for the local media to unveil further irregularities related to Cho and his family. The DP refused this, saying the hearing should be held for a single day this week.

The parties managed to reach common ground Monday, when lawmakers of the Legislation and Judiciary Committee agreed to conduct Cho’s hearing for two days next week, breaking with the custom that minister nominees only go through a single-day hearing.

Minister nominees in Korea are subject to non-binding confirmation hearings conducted by the National Assembly before their formal appointment by the president, a brutal process during which they often have to endure vicious assaults on their reputation from opposition lawmakers.

By law, the president doesn’t need endorsement from the National Assembly to appoint ministers, meaning Moon can go ahead and appoint Cho even without the blessing of the LKP.

Yet the LKP is widely expected to go harder on Cho than it’s ever done before, given Cho’s mushrooming allegations and the fact that he’s at the forefront of the Moon administration’s campaign to reform powerful law enforcement authorities, which the LKP vehemently opposes.

Tensions between the LKP and the DP will likely continue to escalate throughout this week leading up to Cho’s hearing, given that the parties have to narrow down a list of witnesses to summon for the hearing. The LKP urged the DP on Monday to accept their full list, which the DP resisted.

The date of the confirmation hearing was announced hours after Cho, who until July served as Moon’s senior secretary for civil affairs, relayed his policy visions for justice minister for the second time since he was nominated.

The LKP has especially opposed the latter idea, saying it can be used as a tool to oppress figures critical of the Moon administration.