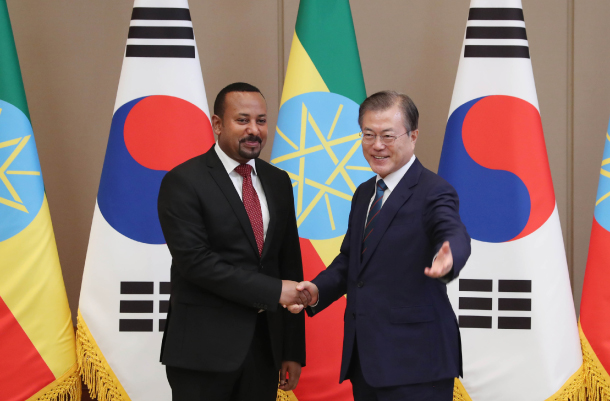 Korea and Ethiopia agreed during a summit between their leaders in Seoul on Monday to launch a joint committee, led by their top diplomats, to deepen bilateral partnerships.

President Moon Jae-in and Prime Minister Abiy Ahmed Ali, who’s on a state visit to Korea, shared the view that the two sides need to expand their traditional friendly ties to “mutually beneficial, substantive” cooperation in such sectors as trade, investment, development cooperation, forestry and environment, according to the Blue House.

The leaders agreed to seek “concrete ways for cooperation” via the ministerial joint committee to be established on the occasion of their summit, it added. The foreign ministers of the two sides signed a related memorandum of understanding (MOU).

The committee will hold a session every two years with a focus on discussing how to strengthen cooperation in various fields, including politics, business, consular affairs, culture, technology, education and science.

In order to facilitate bilateral trade and investment, Moon and Abiy also agreed on the need for an investment promotion and protection agreement.

Moon asked the Abiy administration to pay more attention to possible problems and other difficulties that Korean firms suffer while operating in Ethiopia. Abiy reaffirmed his nation’s firm support for Korea’s efforts for denuclearization and the establishment of a peace regime on the Korean Peninsula.

Immediately after their Blue House summit, the two sides also signed MOUs on visa waivers for diplomatic and official passport holders and cooperation on environment and standard-related systems.

Under another MOU signed the same day, Korea will provide the African nation with $86 million in project loans for the construction of research centers at Adama Science and Technology University.

Ethiopia is a time-honored friend of South Korea as the sole African country that dispatched ground troops to help it fight against invading North Korea during the 1950-53 Korean War. It sent 3,518 service members. Among them, 122 were killed and 536 were wounded.

Abiy arrived in Seoul on Sunday, along with his wife, for his first trip to the country since June 2013 as a member of a parliamentary delegation.

He became the first Ethiopian leader to travel to Korea in eight years. He served as head of the friendly association of Korean and Ethiopian lawmakers from February 2012 till April 2018.